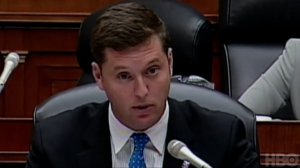 With the repeal of Don’t Ask Don’t Tell (DADT) taking effect Tuesday, Democratic candidate for Attorney General, Patrick Murphy, will be in the spotlight once again.

As the House author of the DADT repeal, former-congressman Murphy was interviewed for an HBO documentary that first airs at midnight tonight, and on prime time tomorrow at 8 p.m. It examines the history of a policy that allowed closeted homosexuals to serve in the military while preventing officials from asking individuals about sexual orientation.

“The stories of the heroes who served our country and then unfortunately were thrown out because of the person that they loved back home is unconscionable,” Murphy said. The repeal was signed by President Barack Obama on December 22, 2010.

Seeking to make history again, two-time Congressman Murphy is now running for a position that has not been held by a Democrat since it became an elected office in 1980.

“When I ran for Congress in 2005, with $322 in my bank account, they said I would never win a Congressional seat. And we made history. And we’re going to make history in 2012 by being the first elected Democrat for the Pennsylvania attorney general,” Murphy said.

“I look forward to the challenge and the grassroots campaign that we’re running across this whole state.”

Murphy said he went through about 3 pairs of shoes on his congressional campaign.

“And I’m going to go through about three sets of tires in my Ford [this time,]” he said. “From going to Johnstown … Bucks County … the Labor Day Parade in Pittsburgh … That puts a lot of miles on my Ford, but if that’s what it takes and is necessary to make history and win this race …”

Murphy served four years in congress but lost his second re-election bid to Mike Fitzpatrick in 2010. According to his campaign, Murphy is also a former Army prosecutor and taught Constitutional and Military Law at West Point.

Mark Segal, publisher of the Philadelphia Gay News, said that Murphy “would be considered a hero to the LGBT community specifically for his work on the Don’t Ask Don’t Tell repeal … It shows that he is a leader. It shows that he has his finger on the pulse of what Pennsylvanians are thinking. He’s a new generation of political candidate and office-seeker that Pennsylvania’s are looking for.”

“There are a lot of fights out there when it comes to our environment, when it comes to being proactive on our fight [against] crime, and doing what’s necessary to stand up for justice, and to right the wrongs that are going on out there,” he said.

As attorney general Murphy said he will be proactive and smart — not just tough — on crime.

This means going at the very heart of violent criminals and putting them in jail where they belong, Murphy said, but also using the office to do the things necessary  to get people off the street before they enter crime.

Spokesman for the Pennsylvania Democratic Party Mark Nicastre said, “We’re very happy with the field of Democratic attorney general candidates. We have several strong candidates with a variety of backgrounds and we believe that the candidate that emerges victorious will ultimately be successful in November 2012.”

On the other side of the aisle, PA Senator John Rafferty (R-Montgomery) is in. Cumberland County District Attorney Dave Freed is also leaning toward a run.