A campaign spokesman characterized it as a strong buy.

Update: A media-buying source indicates that the Murphy ad campaign is about $50,000. A week of significant saturation in the Pittsburgh market runs at about $100,000, the source added.

“My dad was a cop for 22 years. He taught me early on the importance of fighting for what’s right, no matter what,” Murphy says. 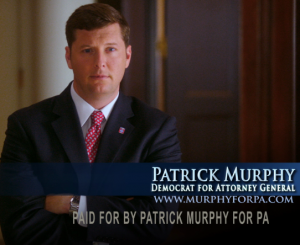 The ad also hints at the recent ultrasound mandate controversy, among other Democratic talking points.

“As attorney general, he’ll enforce the law fairly, to protect the rights of workers, our environment, and protect a women’s right to choose.”

Hat tip to Laura Olson of the Post-Gazette for first reporting the buy.

He faces former Lackawanna County prosecutor Kathleen Kane in the primary. Cumberland County District Attorney Dave Freed is the only Republican on the ballot.

The geography of the buy makes sense: the campaign is shaping up to be a battle for the west. Kane’s best bet – on top of trying to crack Murphy’s home base in southeast Pa. – will be to hold her home base of northeast Pa. and run up the margin in western Pa.

She has the resources to do it. According to the most recent campaign finance reports, Kane has about $2 million on hand, compared to $1.2 million for Murphy. Expect her to be on the air shortly.

Murphy’s camp feels confident about their candidate’s standing in southeast Pa. An internal poll conducted in early January (when former assistant Philadelphia District Attorney Dan McCaffery was still in the race), showed Murphy leading Kane in the Philly suburbs 61 percent to 8 percent for Kane. In the City of Philadelphia, his lead was 37 percent to 10 percent for Kane. (McCaffery had 5 percent in each region).