The animus that has been bubbling in the Attorney General primary boiled over onto the air on Saturday. Patrick Murphy’s campaign began airing the above ad, slamming rival Kathleen Kane for her past contributions to Republicans and her family’s company’s record on labor issues. 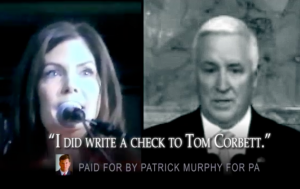 “What [Kane] doesn’t want Democrats to know is that she’s also a millionaire trucking executive. And her company is proudly anti-union, fighting to keep wages lower while Kane profits,” says a female narrator.

“And she’s been in politics, but not on our side. She supported Republican after Republican, even donating to Tom Corbett.”

Both campaigns have been on TV for weeks; Kane has yet to air a negative ad herself.

PoliticsPA delved into both of those charges in early March; you can see the detailed report here.

Here are the broad strokes: the contributions to Republican candidates, including $500 to Tom Corbett’s AG re-elect in 2008, are accurate. She and her husband have given tens of thousands of dollars to Republicans as well as Democrats. The segment on the Kane is Able company and its labor record is where we get into the weeds.

Kane’s campaign says she is not and never was an executive at Kane is Able nor any of its subsidiaries. The company is owned and managed by her husband, Chris, and his family.

“It’s patronizing that Congressman Murphy is attacking Kathleen Kane for policies of her husband’s company, policies over which she has no control,” said Kane campaign manager Sadie Sterner. “Kathleen Kane supports the Employee Free Choice Act and as Attorney General, will vigilantly defend the right to organize.”

Murphy’s proof? Kane was listed as a company exec 11 times by 6 separate political campaigns to which she contributed. That so many people, given reporting requirements, would make the same mistake is too much to be an accident, Murphy’s camp says.

Kane’s camp notes that campaigns, not donors, file those reports and Kane herself is not responsible for what they reported.

Even if she’s not officially affiliated with the company, Murphy’s camp argues, it’s a fair connection since so much of her campaign’s funding comes from her husband and other executives (about 90 percent of her $2 million). Those executives have had an antagonistic history with labor unions. And Murphy points to an appearance on PCN when she said, “I am not a supporter,” when asked whether she supported the pro-union Employee Free Choice Act.

Kane’s camp fires right back, noting that Fox Rothschild, the law firm where Murphy is a partner, boasts their ability to, “design and implement union avoidance programs.” (Murphy notes that that isn’t his practice area).

Murphy is a former Congressman from Bucks County; Kane is a former prosecutor from Lackawanna County. Cumberland County District Attorney Dave Freed is unopposed in the Republican primary.