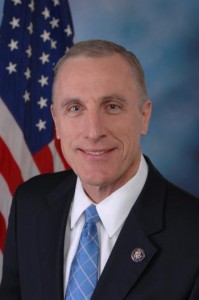 Rep. Tim Murphy (R-Allegheny) blasted Obama’s economic record a day before the President is scheduled to make a campaign stop in Pittsburgh. Murphy spoke during a press conference Thursday morning at the Republican Committee of Allegheny County headquarters in Greentree.

As he has in past campaign events, Rep. Murphy focused much of his speech on what he described as opposition to energy by the Obama administration, a pressing concern among the electorate in the fossil fuel-rich southwest Pennsylvania.

“The continuing loss of jobs in the coal industry and a president who promised us clean coal technologies, and working toward that, he has actually done the opposite,” Murphy said.

“As a matter of fact, his statement saying those who want to work on coal would find themselves bankrupt; that promise is coming true, but the promise of clean coal is not.”

Murphy continued by saying that regulations enacted by the Environmental Protection Agency under Obama have destroyed over 200,000 jobs since the beginning of his term, with southwestern Pennsylvania bearing much of the impact.

He added that in Greene County alone, the coal industry accounts for 40 percent of all jobs.

Attributing congressional gridlock to Obama’s lack of leadership, Murphy said the President’s reluctance to work with Congress has facilitated inaction among members of the Democratic majority in the Senate.

“Now unfortunately, we have a president here who, despite calls for bipartisanship, has been repeatedly unwilling to partner with Congress,” Murphy said, adding that the people have been waiting over 1,000 days for the Senate to pass a budget.

“We need to have someone in office, like Governor Romney, who has made it his point that in his first days in office, he’ll take several initiatives that lead to jobs,” Murphy said.

Joining Murphy at the event was Pittsburgh resident Dan Garcia, a law school grad who couldn’t find work as an attorney during Obama’s tenure, and now holds a construction job.

Garcia said he knew of many other college graduates with degrees – including those with juris doctorates – who have found themselves underemployed during the current economic downturn in the U.S.

“You have folks who are graduating from undergrad, and the investment they made, they’re not seeing the return on the investment right now because it’s really difficult for companies to hire when they’re now looking at other expenses coming down from Washington.”