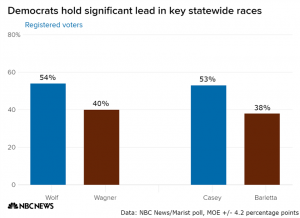 A new NBC News/Marist Poll released this evening that polled registered voters and adults shows Democratic incumbents Gov. Tom Wolf and Sen. Bob Casey holding double digit leads over their GOP challengers, Scott Wagner and Rep. Lou Barletta. This same poll shows a majority of Pennsylvanians are at odds with President Trump over his job performance and his administration’s policy on tariffs.

In regards to the races for Governor and Senate, this polling is a significant contrast from a poll released a couple days ago from the Commonwealth Leaders Fund, a conservative group, that showed Wagner and Barletta trailing by 3 points or less.

Wolf leads Wagner 54% to 40% among registered voters with 6% polled currently undecided. 51% polled have a favorable view of Wolf, while 39% viewed him unfavorably, and 10% falling in the “unsure-never heard” column.

Wagner had a favorable view with 36% polled, while 34% held an unfavorable view of him. 30% polled for Wagner fell into the category of “unsure-never heard.”

Casey leads Barletta 53% to 38% among registered voters with 8% undecided. 48% polled have a favorable view of Casey, with 34% viewing him unfavorably, and 18% were in the “unsure-never heard” column.

30% polled have a favorable view of Barletta, while 24% view him unfavorably, and 45% polled fell in the “unsure-never heard” column.

Polls of registered voters tend to lean more in the Democrats favor as opposed to likely voter polls.

The article references a significant gap in name identification between Casey and Barletta and cited ad spending as a factor. Casey’s campaign spent more than $1.5 million on the air thus far in the cycle, according to Advertising Analytics, while Barletta’s campaign has spent just shy of $60,000.

Barletta released his first television ad this week discussing school safety, while Casey has been on television for a longer period of time.

The most important factors in deciding the vote for registered voters for November’s Congressional races were “the economy and jobs” at 24% and “healthcare” being the most important for 23%. The next closest issue was “immigration” at 13%.

Trump’s net job approval rating among registered voters was at -16%, (37% approving, while 53% disapprove). The last NBC/Marist poll in Pennsylvania was conducted last August had Trump with a -19% net approval rating.

The article cited which groups Trump performs most well with and what groups he has his lowest approval rating.

Trump remained popular with Republicans in Pennsylvania with an 80% approval rating. White evangelicals approve of Trump with 59%, rural adults with 58%, and whites without college degrees approving 49%.

Trump’s highest support is in central and western PA, while only 10% of Philadelphians approve and 30% support of Trump in the suburbs.