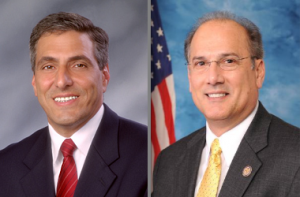 The Northeast Pennsylvania Tea Party is in the midst of launching a campaign against Congressmen Tom Marino (R-Lycoming) and Lou Barletta (R-Luzerne) for their support of legislation that would create tax incentives and subsidies to encourage the use and production of natural gas vehicles.

“We were fans of [Rep.]Barletta and [Rep.]Marino,” said NEPA Tea Party leader Bob Orbin. “And it’s disappointing to see them backing these types of plans whey they say they back the free market.”

A robocall was launched in Barletta’s district on Tuesday and to date there have been 10,000 targeted calls to Republicans & Independents. Orbin said they plan to start calls in the 10th district by next week and are looking to place half-page ads in local newspapers to “notify people of just what’s happening.”

Click here to listen to the version of the call set to go out in Marino’s district.

It would almost certainly add to the demand for energy produced from Marcellus shale natural gas, one of the most significant natural resources in both congressional districts.

The website OpenCongress.org says that while an official budget estimate has yet to be conducted, “The bill would provide approximately $5 billion in subsidies over a five year period.”

This is simply too much money that the government doesn’t have, the NEPA Tea Party told the congressmen in an email.

“The national debt is now over $14 Trillion Dollars, which will soon to be over $17 Trillion; and, with the Federal government having to borrow over 40% of every dollar spent … The Tea Party and the conservative movement did not send conservative Members to Washington, DC to have them ‘gift’ taxpayer dollars (in the form of subsidies) to political entrepreneurs like T. Boone Pickens or to further interfere with the free market.”

Barletta’s spokesman Shawn Kelly, wrote in an email that “Rep. Barletta supports efforts to reduce America’s dependency on foreign oil, and he supports the sensible, responsible use of natural resources here in Pennsylvania.”

Kelly said Barletta would like the opportunity to speak with the NEPA Tea Party about their specific concerns. Kelly and Orbin both confirmed that a meeting was scheduled last week but had to be canceled because of the flooding due to Tropical Storm Lee.

Orbin said they “were looking forward to the meting with Rep. Barletta but it never materialized.”