The Barletta campaign released its second ad of the campaign season Friday, touting the Incumbent Congressman’s fight during his first two years in Congress, and going negative on Democratic hopeful Gene Stilp yet again. 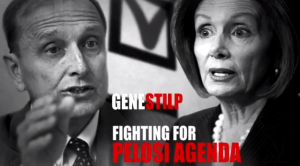 The ad, titled “Fighting for Jobs,” highlights his fight for Pennsylvania taxpayers, his fight to protect social security, and his fight to keep jobs out of the hands of illegal immigrants.

It’s a heavy buy on network TV in the Scranton/Wilkes-Barre and Harrisburg markets. For an incumbent like Barletta to be spending a quarter of a million dollars says either that the race is closer than people realize, or that he’s looking for a decisive win to deter potential 2014 challengers.

“Gene Stilp’s fighting for Pelosi’s radical agenda, that cuts seniors medicare by $716 billion and puts a massive tax on our small businesses,” the ad says.

“Desperate attacks from a career politician who cannot stand firmly on his own record in Congress,” responded a Stilp campaign spokesman. “His attempts to tie Gene to a person that he has never met or even spoken to is the kind of smoke and mirror show that we have come to expect from Lou Barletta.”

Stilp’s campaign hasn’t had a sustained media push, but they did produce this hilarious web ad and aired it a few times on television.

But he’s done well in the printed press. Both of the district’s largest papers, the Wilkes-Barre Citizens’ Voice and the Harrisburg Patriot-News, endorsed Stilp.

“We believe Stilp offers voters an opportunity to send a message to Washington with someone who is not only against the mess that is now Congress but is also someone who has proved over and over he is for good government,” the Patriot wrote.