It touts Casey’s various accomplishments in the U.S. Senate. 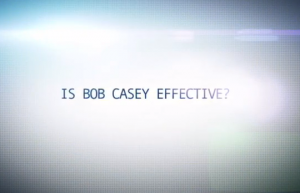 “Flood relief for PA? Bob Casey got it done. The middle class payroll tax cut? Bob Casey wrote the original bill. Help for workers who lose their jobs to unfair foreign trade? Bob Casey did that, too. And the Harley plant in York? Bob Casey helped keep it there,” lists an announcer.

“Is Bob Casey effective? Tom Smith should ask these guys.”

Smith has labeled Casey “Senator Zero” due to the fact that the first-term Democrat has not authored a bill that became law. Casey has responded, saying legislation he’s written has been incorporated into other bills and passes. The attack, he says, shows a lack of understanding about the legislative process.

The polls have tightened in this race in recent weeks, a shift most observers attribute to Smith’s television ads. One of the hardest hitting was this one, which says, “Casey’s been called ‘the Senate’s most ineffective legislator.’ He’s the invisible Senator.”

Casey’s team must believe that criticism has stung; its unusual for a campaign to respond so directly to the language of an opponent’s attack as this ad does.

Meanwhile, Smith unveiled a commercial of his own – a 60 radio ad about coal.

Smith started as a coal miner then began his own mining business, which he grew to a mid-sized operation.

Back in June, Smith blasted Casey over his vote for stricter environmental rules for coal mines.

His ad features a miner who was laid off and blames President Obama.

“My name is Colt Bowman from Rockwood, Pennsylvania. I was one of those laid off miners. They told us that Barack Obama’s new regulations forced the job cuts. It hurts that our own Senator, Bob Casey, supported these regulations. If Bob Casey is re-election, what happened to me could happen all across Pennsylvania.”

Listen to the ad here: