New Critz Ad Hits Back Against Altmire (With Video)

Mark Critz has blasted Jason Altmire for an ad Altmire’s campaign began airing this week. Now, Critz is taking his case to TV with a rebuttal. The ad will begin airing Friday evening.

“I’m Mark Critz, and this attack from Jason Altmire is simply not true.  I’ve fought against every  Republican attempt to dismantle Medicare and gut Social Security,” Critz says to the camera. “The vote Jason is attacking me for was actually an effort by Democrats in Congress to defeat the Republican budget.”

“Every Pennsylvania Democrat except Jason voted the same as me,” he notes. 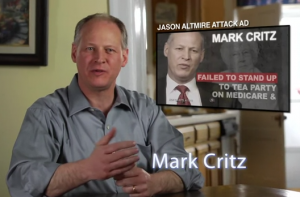 In his ad, Altmire criticized Critz for failing to vote against a Tea Party budget that would have slashed entitlements including Medicare.

Critz’s campaign responded immediately, noting that the vote was a parliamentary tactic by Democrats aimed at defeating the GOP. Indeed, all but 16 Dems in Congress voted with Critz. Some, including Minority Whip Steny Hoyer and Rep. Bob Brady, have spoken out in Critz’s defense.

The idea was, if Democrats voted ‘present’ rather than no on the Tea Party alternative to Rep. Paul Ryan’s budget, then the threshold for passing it would be lower and the GOP Majority in the U.S. House might actually pass a product even less likely to pass the U.S. Senate.

Altmire’s ad isn’t technically false, but it is misleading. His campaign says that political maneuvers aren’t an excuse.

“The last thing we need are more politicians playing insider games, failing to take a stand and putting partisan politics ahead of protecting seniors’ benefits. If you’re against something, you vote NO,” said Altmire spokesman Richard Carbo.

Indeed, he addressed that issue in a radio ad airing in the district.

Responding to a negative ad with another ad is tricky; a campaign must refute the charge quickly and attack the opponent strongly without simply bringing more attention to a negative issue. The ad spends a fair amount of time talking about the vote, but Critz doesn’t go for the kill – instead signing off with, “I approved this message because Jason is better than this.”

To bolster his credibility on entitlements, today Critz rolled out an endorsement from the Alliance for Retired Americans, an organization with about 15,000 members in the 12th district.

“Nobody has a stronger record of fighting to protect and strengthen Social Security and Medicare than Mark Critz,” said Pa. Chapter President Jean Friday said. “His 100 percent record on seniors’ issues, and his willingness to stand up to those who want to cut benefits makes him the clear choice in this race.”

Here are the line-by-line citations for Critz’s new ad, courtesy of his campaign.