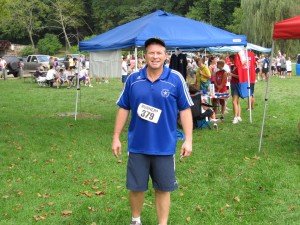 Rumors abound that David C. Haines, Chairman of the Lehigh Valley International Airport Board of Governors, will enter the Democratic primary in Pennsylvania’s 15th Congressional district.

Haines applied for a vacancy on Northampton County Council in 2008 but was passed over. Since then, the former pilot has occupied his time as a member of the Lehigh Valley Chamber of Commerce’s Board of Governors, assistant coach of the Northampton High School boys soccer team, and a deacon at St. John’s Church in Howertown.

He was unable to be reached for comment after several attempts by PoliticsPA but Lehigh Valley Democratic insiders say that Haines will likely enter the race if Bethlehem Mayor John Callahan bows out.

Callahan is viewed favorably by the Democratic Congressional Campaign Committee and raised $2 million in his 2010 loss to Dent. The Mayor has had meetings with the DCCC since then, and many speculate that he will pursue a rematch.

However, sources with knowledge of the situation say that Callahan’s family isn’t eager for him to embark on the rigors of a congressional campaign again.

Regardless of Callahan’s decision, Lehigh County Democratic Chairman Rick Daugherty has already announced his intention to seek the nomination.

PoliticsPA was able to discuss the 2012 prospects with Charlie Dent’s campaign manager, Shawn Millan, who didn’t seem troubled by the possibility of a crowded Democratic primary.  “We’ll start to pay attention after the [petition] signatures are in.”

But Union leader Ed O’Brien, who twice challenged Toomey in PA-15,  isn’t ready to admit that all hope is lost for the Democrats in the district. “A Democrat can certainly win,” he said. “A good candidate will define the issues before Dent does. A well funded and hard working candidate can win here.”

PA 15 has maintained a stable population growth that should prevent it from undergoing substantive redistricting changes.  The only rumored alteration would involve pushing a portion of Montgomery County into another district.  According to Millan, “Electoral dynamics aren’t going to change radically as the result of any redistricting plan.  It’s not going to be substantially more Republican or more Democratic as far as registration.”