It’s the most direct effort yet to use President Barack Obama to hurt Rep. Mark Critz (D-Cambria). The YG Action Network, a Republican super PAC aimed at electing GOP members of Congress, is using President Obama’s infamous ‘bitter clingers’ remarks against the Congressman from Johnstown. 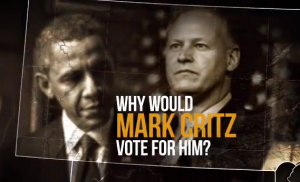 “We know what Barack Obama thinks about us,” says a narrator. She quotes the President:

“You go to these small towns in Pennsylvania and… they cling to guns or religion or antipathy to people who aren’t like them”.

“So why would Mark Critz vote for him?”

“Keith Rothfus and his allies continue to lie about Mark Critz to hide the fact that Keith Rothfus wants to end the current Medicare program in 10 years which will cost seniors thousands of dollars more each year for their health care,” he said.

“Mark Critz is pro-life, pro-gun and he is taking on the EPA to protect coal and natural gas jobs in Western Pennsylvania. While Keith Rothfus pretends to be a regular guy on TV, Mark Critz proves every day that he is the only candidate in this race who shares the values of the people of Western Pennsylvania.”

It’s no secret why. Obama lost the 12th district by 9 points in 2008, and almost no one expects him to match that record this year. Many polls of the PA-12 this race also poll the presidential election, where Obama trails by a comparable margin. That means Critz will need to over-perform the President by double digits in order to win re-election.

The narrator pivots to a pro-Rothfus conclusion.

The spot also rehashes a claim from the group’s original ad that an Obama adviser said Critz and the President “share common values.” There, the context is illuminating.

It comes from a statement given by White House Press Secretary Robert Gibbs right after Critz won his special election in 2010 by running against some of the President’s key initiatives (i.e. Obamacare).

“I doubt there are many in Congress that agree with each and everything that the President agrees on,” Gibbs said. “We have the luxury of enjoying a party with a big tent… there are common values that we enjoy as members of the same party.”

And for reference, Obama’s full ‘bitter clingers’ comments were:

“You go into these small towns in Pennsylvania and, like a lot of small towns in the Midwest, the jobs have been gone now for 25 years and nothing’s replaced them. And they fell through the Clinton Administration, and the Bush Administration, and each successive administration has said that somehow these communities are gonna regenerate and they have not. And it’s not surprising then they get bitter, they cling to guns or religion or antipathy to people who aren’t like them or anti-immigrant sentiment or anti-trade sentiment as a way to explain their frustrations.”