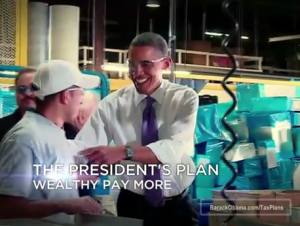 The Obama campaign has released a new television ad targeting Mitt Romney’s tax plan, keeping up the message that the Republican hopeful wants to cut tax breaks for millionaires. Obama, meanwhile, wants to, “ask the wealthy to pay a little more”.

The ad hit the broadcast waves in nine states, including Pennsylvania. It follows several days of messaging about the Bush tax cuts. The President said he would sign an extension only for those cuts that benefit Americans making less than $250,000 per year, and veto any others.

The ad, titled “Two Plans,” is meant to offer two choices between Obama’s and Romney’s future tax plans for millionaires, oil companies, and working middle class families. The ad zeroes in on a constant theme for the Obama campaign this November: The middle class loses if Romney wins.

The Romney campaign’s response to Obama’s claims? Get a clue.

“Over the past four years, it’s become clear that President Obama doesn’t have a clue how to get America working again or help the middle class. President Obama’s tax increase will hit families, job creators, and small businesses all over the country,” said Andrea Saul, Romney’s campaign spokesperson. “Governor Romney understands that the last thing we need to do in this weak economy is raise taxes on anyone.”

It appears that Pennsylvania’s steady diet of Obama ad’s is paying off in the polls for the Commander in Chief. Obama leads by 7 in the Keystone State, and has shown no signs of slowing down the influx of ads into Pennsylvania. Romney has yet to get on the board here in terms of ads, fueling speculation that Pennsylvania will go blue on election day.