The Obama for America Campaign released a television ad Monday that delivered a hard-hitting blow to Mitt Romney’s claim that his business experience uniquely qualifies him to run the national economy. The 2-minute ad, simply entitled, “Steel” focuses on the bankruptcy and closing of GST Steel while under the corporate leadership of Bain Capital. 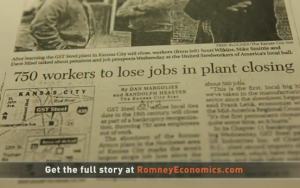 The Romney camp responded by pointing out that Romney left Bain Capital in February 1999, two years before the bankruptcy of GST Steel.

The ad features Joe Soptic, former GST Steel employee, along with David Foster, former lead negotiator for GST Steel workers. They give a firsthand account of GST’s closure and the subsequent loss of 750 jobs.

“It was like a vampire. They came in and sucked the life out of us,” said another worker.

The ad was released in Pennsylvania, Iowa, Ohio, Colorado and Virginia on the heels of another ad with a similar argument: that a disconnect exists between Romney and middle-class America. It ties in with a new anti-Romney website from the Obama camp.

“They all had more money than they’ll ever spend,” Soptic says of Romney and his business partners at Bain Capital, the majority owner of GST Steel at the time of its closing. “Yet they didn’t have the money to take care of the very people that made the money for them.”

In addition to job loss, worker pensions were underfunded and the health insurance and life insurance of employees and retirees were cut. “Bain Capital walked away with a lot of money that they made off of this plant. We view Mitt Romney as a job destroyer,” John Wiseman, another former steelworker, says in the ad.

The Romney camp obviously disagrees. Romney spokesperson Sarah Pompei said when comparing the two, Romney will always come out on top in terms of job creation.

“We welcome the Obama campaign’s attempt to pivot back to jobs and a discussion of their failed record.  Mitt Romney helped create more jobs in his private sector experience and more jobs as Governor of Massachusetts than President Obama has for the entire nation.”

The spot, airing 6 months before election day, portends a negative campaign season. Obama’s approval ratings on the economy have been tepid, and thus his strongest play is to taint Romney’s business experience.

During a press conference call following the release of the ad, the Obama camp clarified some of the claims made in the video.

According to the campaign, Bain Capital invested $8 million in GST Steel then loaded the company with more than $500 million in debt over 10 years. Foster said that after GST was forced to declare bankruptcy, Romney and his partners walked away with about $12 million.

He claims that $9 million in severance and pension pay was given to the individuals who controlled the company.

“Romney put himself and his partners first,” Foster said during the conference.

In addition, Stephanie Cutter, Deputy Campaign Manager for Obama for America, said Romney’s exit from Bain Capital is not a sufficient reason to shift the blame. She asserts that Romney still set the events in motion which led to GST Steel’s closing.

She said the Obama campaign is trying to communicate that Romney’s business values do not align with the economic interests of middle-class American workers, and thus the nation as a whole.

“This is not about private equity or how Romney ran his company. It’s about values,” Cutter said. “We don’t want an economy where workers are left behind.”