The battle over who’s the real outsourcer continues. In a new television ad released Thursday, Romney questioned the veracity of Obama’s campaign.

While the ad did play on The Today Show Thursday morning, “No Evidence,” will not air in Pennsylvania.

So far, Team Obama has spent over $4 million on the air in PA,  the seventh most of any state.  Romney’s campaign has yet to pay to rebut those Obama attacks in the state.

The 30-second spot asks the question, “When a President doesn’t tell the truth…how can 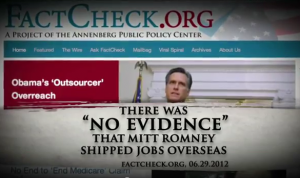 we trust him to lead?”

It dismisses Obama’s outsourcing attacks against Romney as false and cites a Washington Post article as support:

“The Obama campaign fails to make its case. On just about every level, this ad is misleading, unfair and untrue, from the use of ‘corporate raider’ to its examples of alleged outsourcing.  Simply repeating the same debunked claims won’t make them any more correct.”

It also names findings from FactCheck.org:

“We found no evidence to support the claim that Romney, while he was still running Bain Capital, shipped American jobs overseas.”

However, these finding from FactCheck were based on the belief that Romney left Bain 1999, yet in Thursday morning’s Boston Globe report, they found that SEC filings indicate that Romney remained with the company until 2002.

The year of his departure has been the Romney team’s central evidence that he was not responsible for Bain companies that went bankrupt or laid off workers after 1999, such as GST Steel – a company featured in Obama attack ads Steel and Heads or Tails.

Obama for America Deputy Campaign Manager Stephanie Cutter issued a statement on the Globe’s report and said it put Romney “at the center of responsibility for troubling investments involving outsourcing and bankruptcies.”

“It’s time for Mitt Romney to come clean so that the American people can make their own judgments about his record and his motivations.”