Jack Wagner doesn’t pull punches in his latest television ad. It slams City Councilman Bill Peduto on several fronts, using some attacks identical to those in an ad aired by Mayor Luke Ravenstahl. 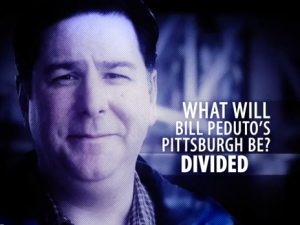 “Bill Peduto’s Pittsbugh? Divided. Dysfunctional. Not what we want to be.”

It’s the first all-negative ad from Wagner’s campaign, and it began airing this week just as Peduto switch this his first all-positive ad in weeks.

Several of the charges of familiar: they use the same citations as an attack ad from a PAC chaired by longtime Peduto rival Ravenstahl.

Peduto’s campaign has said he opposed the projects referenced in both ads because of opposition from those communities.

The ad also reiterates an earlier charge by Wagner that Peduto has awful relationships with his colleagues on Council.

A new hit is this: “He proposed a 6% property tax increase.”

“With the most recent polls showing Jack Wagner falling behind Bill Peduto in the race for mayor, Wagner, despite saying he is opposed to negative campaign ads, has joined his Republican-allies in an assault on Councilman Peduto’s character,” said Peduto’s campaign in a statement.

“Payroll records indicate Mr. Peduto’s salary has increased 15% or $8,436 since 2004,” Wagner’s campaign charged. “These records indicate that the Councilman took a only slight reduction in pay for two years, a total of about $2,000. This is a small fraction of what even one Pittsburgh police officer makes.”

Peduto voted for a bill that authorized the establishment of a program in which city employees could voluntarily cause a 2% percent reduction in their salaries for the pay periods for the remainder of 2003. [9/2/03, R 2003-2224, Passed 7-1] The resolution stipulated that funds “derived from the voluntary contribution shall only be used for regular salaries for employees that are threatened to be laid-off due to budgetary reasons.”