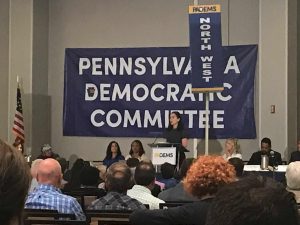 HARRISBURG- The Pennsylvania Democratic Party welcomed three new faces to the general assembly in Harrisburg in 2019 after three separate special election victories and heard their stories at their summer meeting this past weekend.

The three districts in West Philadelphia, Northeast Pennsylvania, and suburban Pittsburgh have very little in common, but all chose to select the Democratic candidate in the special election races in March and April this year.

PA Democratic Party Chair Nancy Patton Mills praised the three newly elected women to office and said DNC Chair Tom Perez called and asked what the message has been in the state, following a strong 2018 midterms.

“Our Chairman Tom Perez called and asked, ‘What are you talking about in Pennsylvania’,” Mills said. “What should I know? What is your message?”

“I said our message is jobs, education, and healthcare and that’s what we’re talking about to the residents of Pennsylvania,” Mills continued.

Kosierowski, who won the blue collar Trump friendly district by 25 points, previously held by the late state Rep. Sid Michaels Kavulich (D-Lackawanna), talked about the results of the 2016 election driving her to run for office, while using her personal experience with healthcare as a motivating factor as well.

“As a result of the election in 2016, I, like most Americans, felt a little shocked and a little scared, disappointed for the future and certainly our country and the children that we will leave here,” Kosierowski said. “And scared of losing our values and principles our country was built upon.”

Kosierowski said Trump won 17 of the 18 boroughs in the district. She also detailed her personal experience of her son being diagnosed with leukemia a decade ago and expressed her gratitude that she had quality health insurance and wants to ensure that no family should have to stress about affording quality healthcare. 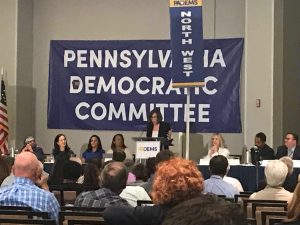 The seat that was flipped toward the Democrats in 2019 was state Sen. Pam Iovino’s four point victory in suburban Pittsburgh. The district she won voted for Trump in 2016, but after a successful 2018 for Democrats in her area, she thought that it was a winnable seat for the party.

She lauded the team effort in the district, specifically the support from unions and Gov. Tom Wolf, Sen. Bob Casey and Rep. Conor Lamb (D-Allegheny), and cited the importance of the party promoting candidates who fit the district well.

“You’re the leaders of your Democratic party back home,” Iovino said. “You have the power and shared responsibility to recruit good candidates that fit the district well. It’s critical that we do this, that we recruit them, promote qualified candidates that fit our districts that are able to win.”

She described her background in the Navy and serving in President George W. Bush’s administration as proof that she was “not radical” and a good fit for her district. Iovino said she thinks there are a number of flippable seats in 2020 for Democrats if they provide a real collaborative effort.

West Philadelphia’s newest elected state Rep. Movita Johnson-Harrell, who cruised to victory in March, represents the most Democrat friendly seat won in 2019, but her personal story with gun violence has guided her career path and view for what is needed from elected officials. 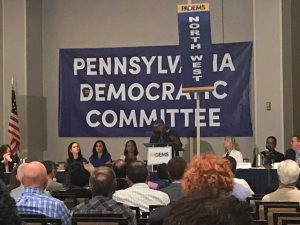 “For us, it was about always dusting ourselves off, picking ourselves up, but in retrospect I see how all of this formed my view of the world,” Johnson-Harrell said.

She told the stories of how she lost her father, brother, and a son to gun violence and that the problem is not simply the gun, but can be attributed to a number of issues.

“I understand that the issue is so much bigger than the gun,” Johnson-Harrell said. “The issue is inadequate education, is food scarcity, is housing scarcity, it’s lack of opportunities…”

Johnson-Harrell’s passionate address concluded with a call for unity among the Democratic Party as they move forward into the all important 2020 election.

The Democratic Party was unsuccessful in their efforts to flip three ruby red seats in special elections held on May 21.

Former NAACP President Ben Jealous was supposed to headline the state committee meeting, but was unable to attend.