No Firm Favorite for Guv at Dem State Committee

Lancaster — The atmosphere has been relaxed at this summer’s Democratic State Committee meeting. Few people wanted to talk about who they support… unless they’re on the payroll.

“We have an excellent field of candidates for governor,” said Montgomery County Democrats Chair Marcel Groen, giving the default line of the night.

Party rules require a candidate to earn the votes two-thirds of committee members for an endorsements, meaning the party is highly unlikely to make a pick.

One noteworthy development: Mike Crossey, the President of the Pa. State Education Association, is talking about a bid for Lt. Governor. He’s from the Pittsburgh area. 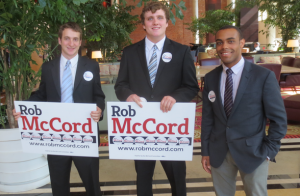 Staffers for several campaigns worked the rooms and handed out literature.

State Senator Mike Stack who is said to be mulling a bid for governor of his own said he was having a good time.

“I have been re-elected four times, I am used to meeting people, looking into running for Governor is energizing,” he said.

When asked about a large campaign banner had been drawn up for him with, “Paid for by the committee to re-elect Mike Stack,” printed on it he attributed it to his eager Senate Campaign Finance Committee.

Other officials were out and about. Some were quick to voice their opinion in primary races.

“I am a strong supporter of State Rep. Brandon Neuman for Lieutenant Governor, if he chooses to run,” stated Rep. Ryan Bizzaro.

When asked about his pick in the emerging gubernatorial field, Senator Bob Casey wouldn’t show his hand.

“We have a wide field, I am excited to campaign not as the candidate,” he said.

He also stated that he intends to actively campaign against Governor Corbett’s re-election. Unfortunately the attendees did not get to see the Senator cut a rug at the Keystone Progress Party, at which he was honored for his support for marriage equality.

“I think I will be leaving for Scranton by then.”