Two national GOP groups, the National Republican Congressional Committee and Americans for Tax Reform, each unloaded a new ad against Rep. Mark Critz (D-Cambria) on Tuesday. Both center on his votes against repealing Obamacare.

The NRCC is the campaign arm of the House Republican Caucus; ATR is a conservative group founded by Grover Norquist to advocate low taxes.

The NRCCC ad, titled “Black and White,” claims that Critz has flip flopped on his stance for Obamacare, saying he did not support it, but then voted for it while in office. Its visuals were very similar to a previous NRCC ad knocking Critz on flip flopping on China policies and government spending. 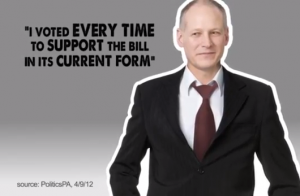 “Keith Rothfus’ allies are once again lying about Mark Critz’s record because Rothfus cannot defend his support for ending Medicare’s guaranteed benefit,” said Mikus. “Mark Critz opposed the Obama healthcare bill and even voted to repeal the individual mandate, the medical device tax and other provisions. The real difference is that Keith Rothfus supports ending Medicare as we know it by getting rid of Medicare’s guaranteed benefit, which will cost seniors thousands of dollars in higher healthcare costs.”

Americans for Tax Reform also drilled Critz for his stance on Obamacare, saying that his actions have hurt Pennsylvania seniors.

“Congressman Mark Critz has the wrong prescription for Pennsylvania,” the ad says. “Critz voted against the repeal of Obamacare, hitting middle class families with a tax. Cutting $700 billion from medicare spending, $1.8 billion from Critz’s district.”

There’s never a dull moment in the race for PA-12. Critz also released an ad this week, and each side is touting their fundraising numbers for Q3. However, Rothfus has a leg up on fundraising and in outside help going into the final stretch of the race.

Here’s the ATR ad, helpfully captured by a media buying operative in the 12th district: