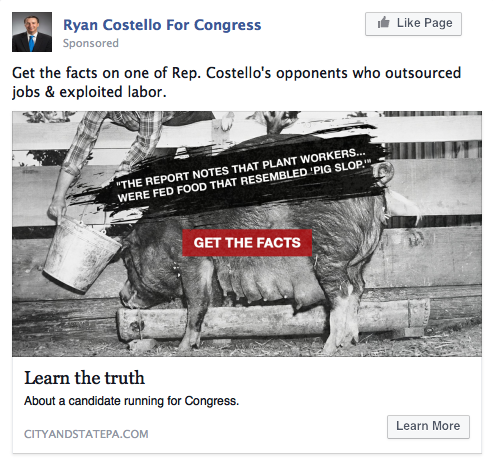 The NRCC’s campaign is centered around a video they are launching titled “Human Rights” that pushes some of the claims highlighted in the report.  The ad will be pushed on Facebook to swing voters in the district.  The buy will run for two weeks, with a significant amount of money behind it.

“The Houlahans will be held accountable for the well-documented atrocities that occurred in Dongguan and B Lab’s certification of companies that were also responsible for human rights abuses. Their fortune was made on the backs of Chinese laborers,” NRCC spokesman Chris Martin told PoliticsPA.

The video then highlights a non-profit Houlahan helped start, B Lab, saying it certified a company for “meeting social and environmental standards the same year it was under fired for human trafficing, forced labor, and exploitation.”  The ad cites an Atlantic report from 2015 to back up that claim.

An ad like this is usually seen later in the campaign cycle, when voters are making last minute decisions over a candidate.  The ad could be part of a push by the NRCC to brand Houlahan in a specific way early in the campaign and put her campaign on the defensive early.

You can view the ad below

The Costello campaign is also pushing along the same message with digital ads linking directly to the City & State report about AND1.

“From feeding workers pig slop to paying workers just 35 cents an hour Greedy Chrissy has proven she will do anything to line her pockets. Pennsylvania families are starting to see exactly how dangerous Nancy Pelosi’s hand-picked recruit would be in Congress,” Costello campaign spokeswoman Andrea Bozek said.

The DCCC responded to the ads saying the attacks are false, and pointing to an local editorial saying Costello had a ‘terrible, horrible, no good, very bad week.’