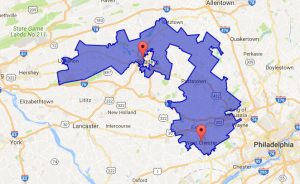 “I think of our seats, if you want to look at kind of a bellwether, it’d probably be Ryan Costello,” Stivers told PoliticoPro.

“If [Democrats] win in Pennsylvania against Ryan Costello, they’ve got a shot to take the majority”

Costello’s seat is one of four Republicans targeted by the Democratic Congressional Campaign Committee (DCCC) for next year.  The district is one of two of the targeted seats that Clinton won in 2016, winning by 0.6 points.  Costello won the seat by 14 points in that election though.

The southeastern Pennsylvania district is likely to be a battleground district with two challengers already entering the race on the Democratic side, and one who is drawing most of the attention of national Republicans and Democrats.

“[Costello’s] a great young member, a rising star, but he’s got a strong challenger and I would pay attention to that race,” Stivers said.

“Chrissy Houlahan’s background as a veteran and business leader make her an exceptionally strong candidate, and a much better fit for this district than a career politician like Costello,” DCCC Spokesman Evan Lukaske said in an email.

The DCCC is also taking the quote by Stivers as a sign Costello is vulnerable next year.

Costello’s campaign pointed to the history of Democrats targeting the seat, and Costello’s push to win next year.

“PA6 has been a target for Nancy Pelosi and Washington liberals for nearly two decades.  I expect this cycle will be no different.  Congressman Costello’s campaign is prepared to defeat whichever Democrat emerges from next year’s Primary Election,” Vincent Galko, a Senior Adviser to Costello’s campaign said in an email.