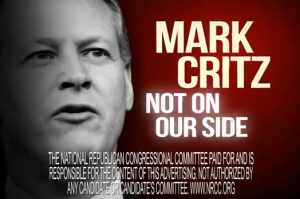 The committee charged with electing Republicans to Congress is once again going after Rep. Mark Critz. Its latest ad paints the incumbent Democrat as a flip-flopper on the health care law.

Critz (D-Cambria) faces attorney Keith Rothfus; no member of Congress in Pa. Has been targeted more by the GOP this year.

“It’s being said that I say one thing and I do another,” says Critz in a disjointed video clip featured in the 30 second ad.

“No wonder,” the ad’s announcer chimes in, “When Candidate Critz says he opposes Obamacare, then Congressman Critz voted to keep implementing it. Critz says gas prices are too high, then he says we need to raise the gas tax.”

The basic criticism – that Critz voted 20 times against efforts to defund or repeal Obamacare – is the same as the NRCC’s ads the group ran in May and August.

Critz wasn’t in office when Congress passed Affordable Health Care Act, also known as Obamacare. Indeed, during his special election win in 2010, he said he’d have voted against it. During the course of his upset win in the primary in April, Critz sought to win Democratic voters away from Rep. Jason Altmire (D-Allegheny) by pointing to his votes preserving the law.

The NRCC, which is involved in the case of this commercial as an independent expenditure, has worked hard to make sure voters remember it. Specifically, they highlight the more than $700 billion the law cut from Medicare as part of an effort to improve efficiency and reduce fraud. The House GOP budget authored by Rep. Paul Ryan (R-WI) – supported by Rothfus – contains the same cuts.

“Mark Critz opposed the health care bill when it passed and voted to eliminate the law’s individual mandate and the medical device tax,” Critz spokesman Mike Mikus said, responding to the ad. “The real difference is Keith Rothfus would turn Medicare into a voucher program to pay for more tax cuts for millionaires, costing seniors an additional $6,400 per year for health care.”

Critz’s campaign says he never voted to raises taxes on gasoline and never would.