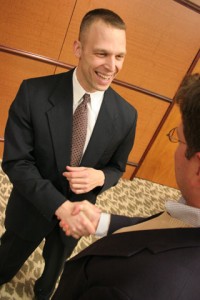 In all likelihood State Rep. Scott Perry is 8 months away from being Congressman Scott Perry. But the GOP’s national congressional campaign arm isn’t taking chances; they added him to their candidate-boosting program Thursday.

“These Young Gun Vanguard candidates will play an imperative role in our goal to keep Nancy Pelosi from reclaiming the Speaker’s gavel,” said National Republican Congressional Committee Chairman Pete Sessions (R-TX). “Middle-class families are tired of President Obama’s out-of-touch agenda that is assaulting the free-enterprise system, and these five candidates will fight tirelessly to offer fiscally sound solutions to get our economy back on track.”

The Vanguard program provides a framework for the NRCC to assist candidates running in Republican-leaning open seats as they head into the fall. Typically the assistance comes in the form of fundraising, as well as polling and other logistical boosts.

Perry won a 7-way GOP primary to replace Rep. Todd Platts by a surprisingly wide margin: he took over 50 percent of the total vote. He thanked the NRCC in a statement.

“I am proud that we were able to secure a decisive victory in the Primary contest,” he said.”Support from individuals and groups like the NRCC is critical in helping me communicate my message that smaller government, less debt and lower taxes is the recipe we need to get our fiscal house in order and spur economic growth.”

The lawmaker will face engineer Harry Perkinson, also of York County. The Democrat’s campaign said Perry’s recognition from the NRCC was expected.

“No surprise here.  Scott Perry is tailor made for the Young Guns program,” said a campaign spokesman. “He would be ready from day one to vote to support the out of touch Republican agenda which hurts working people, women and fails to rebuild our middle class. Mr. Perry will support Boehner, Ryan and Cantor, not the people of the 4th District.”

The newly drawn 4th district (formerly the 19th) grew slightly more Democratic during redistricting, but it’s still considered a safe Republican seat. It contains all of Adams and York counties, part of Cumberland County, and most of the City of Harrisburg.