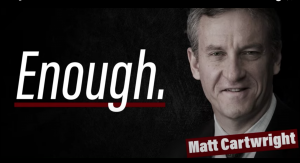 With redistricting looming, Rep. Matt Cartwright is emerging as Republicans’ top congressional target in Pa. in 2022. Continuing a steady cadence of attacks, the National Republican Congressional Committee this week unveiled a new ad campaign against five incumbent Democrats – including him.

“For families like ours, it’s a constant struggle just to make ends meet,” a voiceover says to begin the minute long spot titled, “Enough.” “But if Congressman Matt Cartwright and Nancy Pelosi get their way, everything will cost even more, like gas prices.”

“Even though the price of gas is now over $3 a gallon, Matt Cartwright thinks we should pay more.”

In 2015, Cartwright co-sponsored the Update, Promote, and Develop America’s Transportation Essentials Act (UPDATE Act), which would have “phased in a fifteen cent per gallon tax increase.”

Cartwright’s campaign fired back and pinned Republicans as the ones pushing to raise taxes on Pennsylvanians.

“Congressman Cartwright has been clear, millionaires and large corporations should pay to fund much needed investments in our infrastructure, not working Pennsylvanians,” said Cartwright Campaign Manager Colleen Gerrity. “The only people in Washington working to raise the gas tax right now are Congressional Republicans, who on top of raising the gas tax want to raise fees on hard working Pennsylvania families.”

“These partisan attack ads won’t distract what the people of our district know, the Congressman has been delivering for their families,” Gerrity continued. “The American Rescue plan has put money in their pockets, supported small businesses, and invested in our communities.  Now, Congressman Cartwright is working to advance the American Jobs Plan, which will create millions of good-paying jobs through historic investments in our infrastructure and boosting American manufacturing. He hopes House Republicans will knock off these attacks and join him in this effort.”

The one minute long spot urges Cartwright to not support a raise in taxes on gas, ending with the voiceover telling Cartwright that “enough is enough.”

The campaign will run from June 2-8 and the ad will air on WEZX-FM, WMGS-FM, WILK-AM and WGGY-AM, according to an NRCC spokesperson. It is a five-figure ad buy.

Cartwright defeated challenger Jim Bognet by just over 3.5 points in 2020 to earn his fifth term in Congress, while Donald Trump bested Joe Biden by just under 4.5 points in the NEPA seat. Cartwright is the lone Pa. Democrat in the state to represent a district Trump won last year.