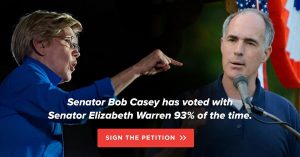 Move over Nancy Pelosi, Republicans have a new liberal bugaboo to use against local Democrats.

The National Republican Senatorial Committee (NRSC) is laying the groundwork for its messaging against Senator Bob Casey by tying him to Massachusetts Senator Elizabeth Warren.

A major part of the effort has been a digital ad campaign comparing Casey’s voting record with Warren’s.  The ad buy is likely aimed at generating earned media, rather than moving numbers in a big way.

“During his time in Washington, Bob Casey has positioned himself squarely on the left, voting with Massachusetts Senator Elizabeth Warren 93% of the time,” NRSC spokesman Bob Salera said.

The vote total comes from all votes from Warren’s start in the Senate in 2013 through 2017.

According to Govtrack, who plotted Casey’s voting record on a liberal-conservative map, Casey have voted along a middle left ideology, compared with Warren’s score of the most liberal.

The NRSC has also tied Casey to Warren in the fight over Supreme Court nominee Judge Neil Gorsuch.

“Bob Casey broke with the mainstream of his party, and indicated that he is prepared to join Elizabeth Warren and the far left in their filibuster of Judge Gorsuch,” Salera said in an email.

It is common practice for the minority party in the Senate to vote together, since the Senate rules allow the majority party to pick the battle ground for every vote.

NRSC’s push to tie the two Democratic Senators together might not draw the reaction they are hoping for from the Casey camp.  Casey’s main move in 2017 has been standing strongly in opposition of Trump, especially on social media.

The NRSC’s messaging against Casey mirrors the messaging they are taking against all Senate Democrats who they view as vulnerable in 2018.  Recent polling shows that Casey in a better position than he was in 2012 for his last re-election. Casey’s numbers in the latest F&M poll show that 19% of Republicans give approve of the job he is doing, while 39% of self-described moderates approve of his job performance.  The messaging could be part of a push to push down the number of moderate Republicans who approve of Casey’s performance.