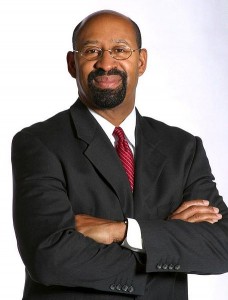 Philadelphia Mayor Michael Nutter will be spending much of his June lobbying for the Trans-Pacific Partnership, Pres. Obama’s massive trade agreement with several Asian countries.

Mayors of almost all the major cities – aside from Bill de Blasio in NYC – are pushing for Obama’s trade deal to go through.

Nutter has been “at the center of the effort,” along with Atlanta mayor Kasim Reed and L.A. mayor Eric Garcetti, to swing the final few votes in Congress in their favor, according to a report from Politico.

“What I do know is trade going from Philadelphia to other places in the world is going to get loaded on the ship by longshoremen at our port, or may be brought by truck by a teamster,” Nutter said in the piece. “I’m the mayor of Philadelphia – I don’t get to have a lot of higher-level debates that sometimes take place in the Congress.”

If passed, the TPP would be America’s largest active free trade agreement, with 12 countries included in the deal. Obama has also said China is exploring joining the agreement.

Congress is set to vote this on giving Obama “fast-track” authority for the deal, which would allow him to enter into trade agreements without approval from Congress.

This issue has caused many fights in Washington, with Democrats and Republicans alike slamming the idea. Rep. Mike Kelly wrote an op-ed for Time.com Tuesday supporting the Bipartisan Congressional Trade Priorities and Accountability Act of 2015.

The Trade Priorities and Accountability Act, also known as the Trade Promotion Authority, is a bill that would give Congress the final say on any potential trade agreement entered into by the president.

Under the TPA, Congress is seeking a place in trade negotiations, proposing almost 150 objectives the administration must complete before Congress will bring the deal to a vote. The text of any potential agreement would have to be made public for 60 days before the president could sign the deal.

“In other words, TPA makes it virtually impossible for Obama or any future president to keep the American people or their elected representatives in the dark,” Kelly wrote.