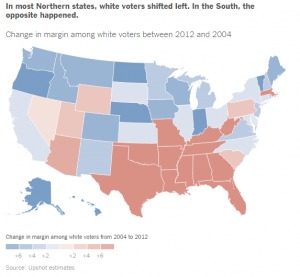 The general belief among political scientists and observers is that Barack Obama’s 2012 victory was fueled by an increasingly diverse electorate.

A study from Nate Cohn of the New York Times, however, argues for another theory. He believes that the electorate is whiter, yet also more Democratic, than previously thought.

“New analysis by The Upshot shows that millions more white, older working-class voters went to the polls in 2012 than was found by exit polls on Election Day,” Cohn writes. “The data implies that Mr. Obama was not as weak among white voters as typically believed.”

In short, Cohn used Census and voter file statistics to come up with a new set of numbers that were different than the exit polls.

According to Cohn’s analysis, Pennsylvania was one of three states that President Obama won in 2012 where Republican received a larger share of the white vote than in 2004 when Pres. Bush defeated John Kerry.

The shift in PA was 3.3%. The other states were Massachusetts (6.6%) and Nevada (1.3%). Concerning Massachusetts, their Senator was the Democratic nominee in 2004 while their former Governor Mitt Romney was the Republican nominee in 2012. As for Nevada, a rapid growth in the Hispanic population overrode the small decline in the white vote. 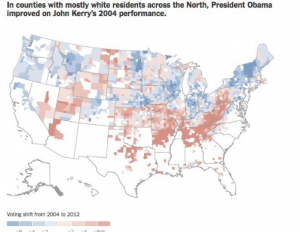 This makes Pennsylvania a bit of an outlier. As you can see from the county by county map, there was a large shift toward the GOP in the western half of the state as well as a smaller move to the Dems in the east (a well-documented trend).

Despite this though, the Times believes that 46% of white Pennsylvanians voted for President Obama in 2012 rather than 42% as the exit polls showed. That would be the biggest jump in support among the states highlighted.

Additionally, the Times experimented by looking at how much of the white working-class vote Donald Trump would have to get in order to win PA if he took an expected hit of five percent among both Latino and college educated white voters.

In that case, Trump would need 64% of the white working-class vote. If the Latino and college whites variable isn’t factored in, he would need 61%.

In 2012, Mitt Romney won 56% of the white working-class vote in Pennsylvania.