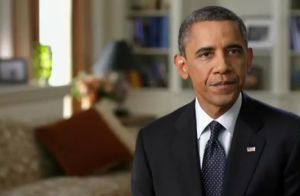 Obama for America released a TV ad Monday called “The Choice,” in which President Obama speaks to viewers about his plan for the nation’s economic future. It will air in Pennsylvania as well as Colorado, Florida, Iowa, North Carolina, New Hampshire, Nevada, Ohio, and Virginia.

The ad deviates from the ominous, grey-scale, attack-spots typical of the Obama camp as of late, as the President addresses Americans in a conversational manner reminiscent of Roosevelt’s fireside chats.

“Over the next four months, you have a choice to make,” Obama begins. “Not just between two political parties, or even two people. It’s a choice between two very different plans for our country.”

The President proceeds to outline and dismiss Romney’s top-down economic approach, emphasizing that it would deregulate big banks and cut taxes for the wealthiest Americans, and claiming that “It’s what caused the mess in the first place.”

His plan, by contrast, is to “[ask] the wealthy to pay a little more,” to pay down the national debt.

Kate Meriwether, Romney Campaign Spokeswoman, said, “President Obama believes that government creates jobs, not hard-working entrepreneurs and small-business owners. Not only are his ‘you didn’t build that’ comments insulting to job creators, but they also reflect how unqualified he is to lead our country toward an economic recovery.”

In contrast, “The Choice” asserts that Obama’s plan for America would allow us to “pay down our debt in a balanced way, [and] to invest in education, manufacturing and home-grown American energy for good middle-class jobs.”

The ad ends with Obama urging viewers to choose his economic policies over those of his GOP opponent. “Sometimes politics can seem very small. But the choice you face, it couldn’t be bigger.”