The Obama campaign shifts its fire from Mitt Romney to Congress in its newest television ad in Pennsylvania. The new spot, “Jobs,” follows the disappointing release of last month’s jobs report.

“We’re still sighting our way back from the worst economic crisis since the Great Depression. The economy is growing again, but it’s not growing as fast as we want it to grow,” says President Obama during a speech shown in the ad. “Our businesses have created almost 4.3 million new jobs over the last 27 months, but…we’re still not creating them as fast as we want.”

The ad itself is short and to the point. It touts some of the progress that has been made in job creation since the recession in an effort to highlight the tough sledding the administration has faced over the past few years. 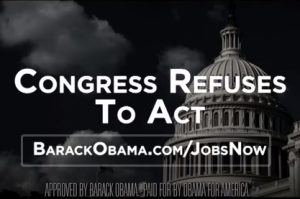 However, this is not the central message that the advertisement is making. Obama focuses his attack not on his republican counterpart Mitt Romney, rather, Congress, for stalling the passage of the American Jobs Act. Obama calls on Congress to pass this legislation, as the video ends with “Tell Congress we can’t wait.”

“President Obama has had three and a half years to keep his campaign promise to grow the economy and create jobs. Now, with record-level unemployment and job creation that even the president calls inadequate, it is clear his policies haven’t worked. Americans know we aren’t moving in the right direction today, and they can’t afford more of the same.” said Amanda Henneberg, Romney campaign spokesperson.

The Romney campaign also sent out a fact-check email about the ad, which says that unemployment and job creation that ended up worse off than the administration initially said. “President Obama’s Advisers Predicted The Stimulus Would Lower Unemployment To 6% Today – But It Remains Above 8%,” the email says.

This new ad is airing in the same progression of states as the most recent ad released by the Obama campaign, hitting key battleground states Ohio, Florida, and Colorado, while still placing a noticeable emphasis on Pennsylvania as a must win state.

As for the Romney campaign? It appears for now Pennsylvanians will only be hearing from Crossroads GPS when it comes to anti-Obama ads.