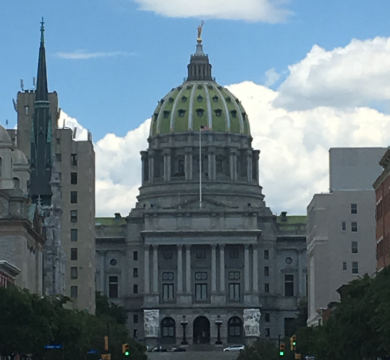 The Senate and Congressional candidates release their Q3 numbers, while the New York Times/Siena College live poll is following PA8. Here is the Playbook.

PA17: Lamb Ends Q3 with Nearly Double Cash on Hand Than Rothfus: The Republican has raised more money in the election cycle-to-date than Lamb, but the Democrat outraised Rothfus by over $350,000 in this period.

State Rep. Sid Kavulich Dies at 62: The state Representative for Northeast Pennsylvania passed away this morning from complications of open heart surgery.

Susquehanna Polling & Research Sees 4 PA Congressional Seats Up For Grabs: SP&R tweeted out their exclusive ranking of each of Pennsylvania’s Congressional districts based on the 2016 POTUS election split between Clinton and Trump showing they currently see a 7/7 split for Dems and GOP in the House. The four seats still in play for them are PA1, PA7, PA8, and PA10. They also stated they along with ABC27 will poll some of these seats in the coming days.

Wagner Digital Ad Hits Wolf on Raising Taxes: The GOP challenger for Governor’s newest digital ad takes place in a classroom where he suggests “Liberal Professor Tom Wolf’s” only solutions to the questions asked are to raise taxes.

Wolf Digital Ad Slams Wagner for “Violent History”: Wolf’s newest digital ad takes multiple clips of Wagner, starting from the recent Facebook Live post that garnered national headlines to interviews in the past, which they deemed the GOP candidate as “unhinged.”

Opinion
John Baer: Pennsylvania’s biggest campaigns are now even bigger disappointments
Post-Gazette Editorial Board: It will save lives: Needle exchange moves needle on national crisis
Post-Gazette Editorial Board: A sweet clarion call: Taylor Swift’s boosts voter registration
Inquirer Editorial Board: Pennsylvania State Police should not police themselves
Will Bunch: Pa. can’t afford to wait until 2023 for a pit bull on climate change. But we might have to
Stu Bykofsky: 2 area Kims are related only in political ambition
Abraham Gutman: Jamal Khashoggi’s disappearance: 12 cartoonists on Trump’s response, the Saudi prince and more
Solomon Jones: It’s time to lock up Cornerstore Caroline and her ilk
Dan Simpson: The U.S. should clean up its act