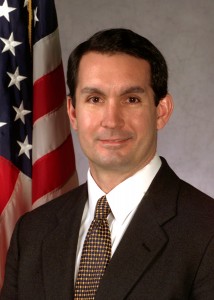 Allegheny County Executive Dan Onorato, as recently as a few weeks ago thought to be a contender for the office of Pennsylvania Auditor General, has thrown his support behind Pa. Rep. Eugene DePasquale (D-York).

Onorato is set to make the endorsement official at a meeting with union leaders today in Pittsburgh.

It’s a win for DePasquale in his effort to sew up the Democratic nomination for AG. A candidate for Governor last year, Onorato’s name ID alone would have posed a daunting challenge for any other primary candidate. In the end, he decided to take a position in the private sector with Highmark.

DePasquale said he was grateful for Onorato’s backing.

“I’m excited to have Dan’s support for my candidacy,” he said. “Politically, it’s an important endorsement because he has a large constituency across the state, certainly in the west. More importantly, with Dan’s qualifications, I know he wouldn’t be endorsing someone unless he thought they could do the job. It gives me even greater confidence that someone of his stature thinks I will be a great Auditor General.”

DePasquale is the only Democratic candidate for AG, although recently there have been rumors that outgoing Allegheny County Controller Mark Flaherty might be in the mix.

On the Republican side, sources say Chester County Treasurer Ann Duke will announce within the week. School choice advocate and MSNBC pundit Joe Watkins, and Pa. Rep. John Mahar of Allegheny County are also rumored to considering a run.

Since winning his House seat in 2006, DePasquale has earned a reputation as a good government advocate. Prior to winning elected office, he worked in the  Department of Environmental Protection. He was born and raised in Pittsburgh.

DePasquale endorsed Onorato during last year’s primary, and often spoke for him as a surrogate in south central Pa.