PA-13: An Exclusive With Daylin Leach 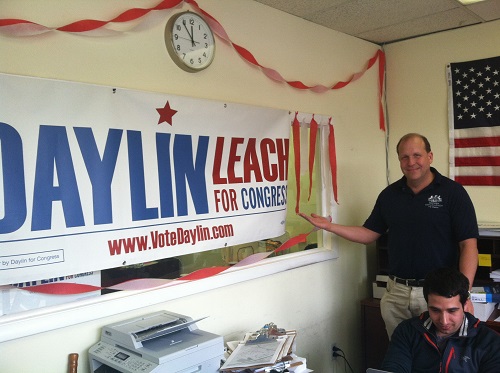 At his campaign office in Jenkintown, Pa., Leach answered questions about himself, his opponents and what kind of congressman he would be, in between snacks of vegetarian sausage and other-such meatless delicacies.

Why Do You Want To Run For Congress?

“There are two reasons,” Leach begins. “Obviously there are some issues in Washington that we don’t deal with in Harrisburg, like foreign policy. I think American foreign policy has been misguided in the last few years and there are things we can be doing that are more beneficial to our interests as well as peace in the rest of the world.”

“Second, you can get really involved in an issue and speak about it, write a great editorial and give a great speech on the House floor and not change a single vote. I got discouraged with that and had a discussion with myself about what I could accomplish. Given that, I eventually realized that it’s not about changing the votes of your colleagues, but changing the minds of the public. If you can do that, politicians will follow suit,” Leach explained. “My talents are well-suited to that and Congress gives you a better platform.”

He went on to give examples of his 20 year career in the General Assembly, seeing public opinion change on the issues of gay marriage – as he introduced the first marriage equality bill in Pennsylvania history and received just one cosponsor; and now the increased support for his end to marijuana prohibition bill.

Some candidates for office are shy about dishing on their opponents. Leach is shy about nothing.

“Broadly speaking, I have a record that’s unlike my primary opponents,” he explained. “I have been a bold progressive. This seat has the opportunity to be one of the most progressive in the country and it would be a tragedy to send someone who is not as progressive or engaged to Congress.”

The early front-runner in this race has been Marjorie Margolies, as she once represented the district before a controversial vote on a Clinton budget that lost her the seat.

“Marjorie has a 20 year record of trying to dismantle Social Security; [she] introduced legislation that would cut cost of living adjustments and raise the retirement age,” Leach said. “And recently, when she was asked about the fiscal health of Social Security she said that we could ask wealthy people to voluntarily contribute more.”

But in this election, Leach claims that Margolies has been absent on substance.

“I’ve taken controversial positions, Marjorie has no issue that she’s spoken about at all,” he said. (Margolies has yet to attend a candidates forum with the rest of the challengers.)

“Brendan has a history of voting very right wing on social issues; he’s historically been pro life,” Leach said. “He also cosponsored a bill that Wendy Davids filibustered in Texas. He’s been a huge supporter of school vouchers which has been the death of public education.”

“We just have very different views.”

But despite the rumors, Leach and his staff adamantly deny that they were involved in the petition challenge to have Boyle removed from the ballot in his run for State Rep.

He had kinder words for first-time candidate, Dr. Valerie Arkoosh.

“Valerie, who I’ve become quite fond of, is a very accomplished person and physician, but I just don’t think running for congress as your first foray into politics is the way to go,” Leach said.

The Democratic Congressional Campaign Committee has been outspoken in their support for the ACA, declaring that all of their candidates would be running on the merits of the law, and while Leach isn’t a super-fan of the law, he acknowledged its merits.

“I want to be clear that if I had my way, we would have a different system – we would have single payer. I don’t see the value added from insurance providers,” he said, going on to explain the Medical Loss Ratio and profits made by insurance companies.

“Because of a couple things, we couldn’t get a single payer or public option – but I think those are inevitable; however, the Affordable Care Act is a fine step along the way,” he said. “Those covered has exceeded 6 million, and of course people should be able to get health care…To the extent that the ACA is able to get people covered, it really is a miraculous thing.”

“It’s the most important piece of social legislation in the last twenty years; I’m happy to defend the Affordable Care Act.”

For someone who has spent ten years in state government, Leach is interested in and conversant on a variety of foreign affairs issues.

“Issues of war and peace are very important to me,” Leach explained. “I’m not a pacifist; there’s a time when action is appropriate and necessary but we have way overdone that. Whether it’s Grenada or Panama or Vietnam or the Iraq War, we have been too anxious to put young Americans in harm’s way and get involved in conflicts that are not necessary.”

As a Jewish-American, Israel was another topic that Leach discussed.

“Israel is very important to me. Growing up as a Jewish person with a last name that was not Jewish, I heard things that I would not have heard if I were more Jewish,” Leach said. “Anti-semitism is very much alive and I realized how important it was for the Jewish people to have a place of safety.”

With more than 400 members of Congress, we asked Leach how he would make himself stand out as a freshman legislator.

“I think I have some experience with this. I stood out in the House and in the Senate. I think anyone who follows the state legislature knows that I have been completely different,” he stated. “The same thing will be true in Congress – I’ll be speaking boldly, being controversial – all the things Congress needs more of.”

He said he would model his service after Hubert Humphrey (for those less nerdy than Leach, Humphrey represented Minnesota in the United States Senate from 1949-64 and again from 1971-78).

“His nickname was the happy warrior and I’ve tried to do that as well, maybe imperfectly,” Leach said. “I remember the humanity of people even who disagree with me. I get along great with most of my Republican colleagues. So, if you can sort of go through these battles while maintaining your sense of humor and sense of humanity it will serve you well. I aspire to do the same.”