State Rep. Brendan Boyle (D-Philadelphia) released his first television ad today in his campaign for the Democratic nomination in PA-13.

“[My wife and I are] not millionaires like every one of my opponents,” Boyle says in the ad. “Right now half of Congress are millionaires but they pay lower taxes than firefighters and teachers. I think their priorities are screwed up. Congress refuses to raise the minimum wage and then cuts programs for the middle class.” 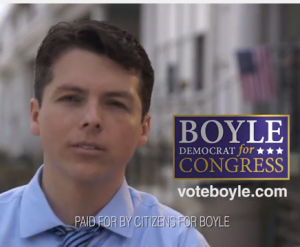 “Over 20 different labor unions endorsed me because defending working class families is my priority,” Boyle concludes.

The thirty second spot will run on a hundred thousand dollar buy on twenty cable networks over the next two weeks.

This will put a big dent in Boyle’s cash on hand, which at the end of the first quarter was just $398,237, compared to the over $600,000 that State Senator Daylin Leach and physician/activist Valerie Arkoosh have.