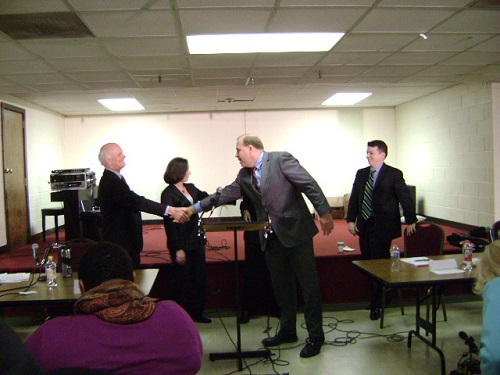 “Trust me people, running for Congress, we can all tell you this, is hard work,” Daylin Leach said during his closing remarks at a candidate’s forum Monday night. How right he is.

It was the end of what must have been another tough day of exhaustive campaigning, fundraising and pleading for votes. The audience was not large but diverse as the event was sponsored by the Willow Grove NAACP and while the organization of the forum was not exactly top-notch, there were cameras there to record it all.

Arkoosh and Adcock arrived first and took the time to mingle with staff and supporters. Sen. Leach, while suffering from a cold, nonetheless was focused on the task at hand from the beginning almost immediately taking his seat. Rep. Boyle apologized profusely when he arrived a few minutes late.

All three Democrats had staffers and supporters handing out fliers and identifying themselves with tee shirts and signs.

There was a loose structure to this forum that involved opening and closing statements and that required audience questions to be directed towards only one candidate. Mercifully, the organizers called an audible after it became apparent this style wouldn’t work and thereafter gave every candidate a shot at each question.

As is standard with these events, some questions were good, many were not, but the performances of each candidate said a lot about them.

Dee Adcock faced perhaps the most difficult task of any candidate as a Republican walking into the lion’s den. While initially reluctant to identify himself as the sole GOP representative, he eventually outed himself as a conservative most concerned with the country’s debt. Accordingly, his favor with the audience began to suffer.

During questioning, he spoke strongly in favor of term limits and made clear that “some level of identification” should be required to vote. On the latter point, he mentioned that even young people buying cigarettes at Wawa have to show ID. He was the only candidate to favor building the Keystone XL Pipeline and expressed concern about the solvency of Social Security and the national debt.

While the doctor and first-time candidate repeatedly mentions that she is not a “career politician” she could certainly fool the uninformed observer. Throughout the night Arkoosh was professional, succinct and on message.

“People need more than a representative in Congress, they need an ally,” Arkoosh said at one point, a sentence which is so well-crafted that it should be part of her stump speech if it isn’t already.

During the Q&A, she advocated for education reform that focuses less on tests, for paid sick leave, and for increasing the minimum wage.

Additionally, she talked at length about her early life in Nebraska and how inconceivable it was to her hometown community that as a woman she could one day become a doctor. The only real surprise from Arkoosh came when she disagreed with her fellow Democratic candidates and stated that she would support term limits because of the current gerrymandered system.

Much like Arkoosh, Boyle was solid and on-message, identifying himself as a “first-generation American” and tackling the issue of income inequality.

“The gap between the wealthiest one percent and the rest of us is larger than it ever has been in our country’s history,” Boyle said.

Boyle noted that President Obama had cited income inequality as the central “challenge of our time” in the State of the Union and pledged to fix that gap.

He also spoke about his efforts in the state legislature to improve education, like introducing a law instituting universal pre-K. The State Rep. also expressed astonishment and disappointment that Pennsylvania remains the only state in the country not to have mandatory kindergarten.

Perhaps his best moment came when he answered a question about voting ID requirements by invoking the people who had fought and died for the right to vote.

If winning a debate constitutes standing out the most, than Daylin Leach definitely won this debate. To watch Leach in a public forum is truly a sight to behold as he is so obviously dying to get involved in every question and debate. Physically he seemed impatient, set to jump in at any moment and was always the most passionate and energetic participant when he did. Even his water bottle bubbled over when he opened it.

It would also be fair to say he got the most applause and laughter of any candidate from the audience.

He started his opening statement by eschewing the podium that shackled the other speakers, until he was told he had to go back to stay in the right light for the cameras. Nonetheless, he emotionally described his experience as a foster child and how government aid and the dream of public service helped him out of poverty.

In an obvious reference to the one missing Democratic candidate Marjorie Margolies, Leach asserted that “being the 218th vote is not leadership. Being the first vote is leadership.” He also hit the former Congresswoman for her past efforts to reform Social Security.

The State Senator skirted through potential gaffes with complete obliviousness. A more cautious politician, for example, may have been hesitant to mention his strong efforts for same-sex marriage. Leach thought nothing of it.

A politician with a safer internal mechanism may not have joked about a conservative colleague by citing his belief that the Earth is only 6,000 years old while in a church.

Yet, Leach had perhaps the moment of the night when talking about his Jewish background. Since he didn’t have a Jewish name, Leach explained, he witnessed “under-the-surface racism” when others, unaware of his heritage, would make anti-Semitic comments in his company. The Senator’s phrase audibly struck a chord with the crowd.

While last night was merely another episode in a long marathon, occasions like this can be quite revealing to the voter who’s paying attention and they definitely should not be missed.