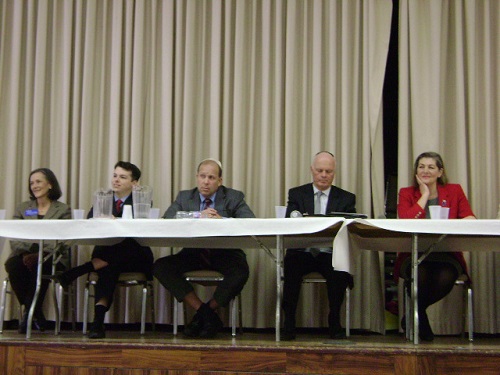 On Sunday morning, the latest chapter in the free-for-all to replace Allyson Schwartz in Pennsylvania’s 13th Congressional District took place.

Five of the six congressional candidates assembled at the Congregations of Shaare Shamayim including Democratic candidates Val Arkoosh, Brendan Boyle and Daylin Leach (Marjorie Margolies did not attend) as well as Republicans Dee Adcock and Beverly Plosa-Bowser. In honor of the setting, all three male candidates wore yamakas.

The candidates sat at a table on stage and took questions from two journalists and written queries from the audience.

Perhaps the most impressive accomplishment of Val Arkoosh’s (besides the fundraising) despite being a first-time candidate, you’d be hard pressed to notice. She’s able to speak off-the-cuff, without notes, and come across as a credible candidate.

She started off the morning with an effective response to the first question, which concerned a recent CBO report that estimated an increase in the minimum wage to the $10.10 rate that the President has proposed would cost 500,000 jobs. Arkoosh countered that a famous 1994 study which monitored fast-food restaurants along the Pennsylvania/New Jersey border showed raising the minimum wage does not hurt employment.

One of her better moments was her response to a question on the debt and whether a balanced budget Constitutional Amendment is needed.

“I believe 49 states have balanced budget amendments and they are able to have those because of the safety of the federal government which can step in during natural disasters and other events,” she stated. “Cutting, cutting, cutting never gets us anywhere. We’ve seen the damage that’s caused in Europe.”

Somewhat surprisingly, she was the only candidate to cite incumbent Rep. Allyson Schwartz as a PA Congressional role model when asked. She also had a creative answer when the expected topic of Israel came up, wherein she not only voiced her support of the nation but described areas, like green energy and farming, in which she’d like to see the U.S. learn more from the Jewish state.

Brendan Boyle had the clear home field advantage as the debate took place within the district he represents in the State House. He had a great showing of support from campaign staffers, supporters and even his brother and fellow legislator, Kevin. He estimated that this was probably his 100th visit to Shaare Shamayim and his reception seemed to confirm that. While every candidate received polite applause throughout, Boyle’s was always the loudest.

A bright spot for Boyle was his defense of Social Security (in front of a crowd with a significant number of seniors). The State Rep. used a question about taking care of seniors to talk about his beliefs that the worries over the program’s solvency are completely overblown.

“Every year that Social Security has existed, it’s posted a surplus. As a result, it is funded through 2042,” he stated.

Boyle also pointed toward a long-term solution for the program, eliminating the FICA tax cap that limits Social Security taxes on only the first $117,000 of income.

“If we simply lift the FICA tax cap, we can save and protect Social Security until the year 2100,” Boyle asserted.

Boyle likely had his best moment, though, during his closing statement when he described a 1940 photo which hangs in his office that shows Jews who escaped the Holocaust staring at the Statue of Liberty.

Even on the home turf of one of his opponents, State Sen. Daylin Leach still took command of the event, directing traffic when it came to speaking order and moving the previous few microphones around. As I’ve written before, to watch Leach in action is really quite a sight.

At events like these when candidates can tend to drone on, you’ll inevitably find those on stage and in the audience zoning out at some point. Not Daylin Leach. The man hardly ever sits still and when he does his eyes pick up the slack, roaming around the room reading the crowd. To say he is the most energetic of the candidates is both true and not even a fair contest.

As expected, Leach batted away conservative ideas like term limits and tying legislators salary or job to the ability to pass a budget. He also pointed out that the same CBO report that said 500,000 jobs would be lost under a $10.10 minimum wage also stated that such a change would nonetheless lift 900,000 people out of poverty.

Leach took an especially strong stand when the issue of campaign finance reform was brought up.

“Citizens United was the worst Supreme Court decision in the last 100 years,” he claimed.

It shouldn’t be a surprise he also got the biggest laugh of the morning when asked for his favorite current or past Pennsylvania legislator.

“I thought Ben Franklin was pretty good,” he deadpanned before offering Joe Hoeffel as a more recent example.

Once again, Republican Dee Adcock braved the heavily-Democratic district in another open forum. While he started out extremely slow (it appeared as though he wrote his opening statement and read it straight from his binder) altogether he gave a much livelier performance than at the NAACP forum a few weeks ago.

In particular, Adcock was much tougher on the President, especially concerning the Obama Administration’s record on foreign policy.

“What we’re seeing are the effects of leading from behind,” Adcock said in response to a question about Russia’s incursion into Crimea.

He also named Israel as America’s most important ally in the world and cautioned that a nuclear Iran would bring “the end of Judaism on Earth”.

Adcock also advocated for a stronger border with Mexico and a balanced budget tied to the nation’s economic growth rate. He cited Mike Fitzpatrick and Pat Meehan as congressional role models.

Most interestingly, the campaign arrived with about a dozen copies of Charles Krauthammer’s latest book “Things That Matter” and the candidate suggested in his closing statements that everyone should grab a copy. Perhaps not the best use of resources, unless Dee has some stake in Random House Publishing.

This time Adcock wasn’t the only Republican present as Beverly Plosa-Bowser also took the stage. This may have been her first, or one of her first, public appearances as a candidate. She spoke haltingly throughout, but never committed any gaffes or embarrassed herself which is a victory for any inexperienced candidate.

A retired Air Force Colonel who served for thirty years, Bowser was the first to refer to foreign affairs, mentioning Israel in her opening remarks. Poignantly, she noted that in the Middle East “Death to Israel” is such a natural epithet that cab drivers use it in traffic.

“While I served my country around the world, all the while I kept the 13th congressional district in my heart,” the area native said in perhaps her finest moment.

For the rest of the discussion Bowser stuck to Republican principles along with statements criticising the President’s foreign policy record and opposing raising the minimum wage. When asked to name a role model she cited Rep. Mike Fitzpatrick, who she described as a friend.

Finally, there was the candidate who wasn’t there. It’s become obvious that Marjorie Margolies’ opponents, particularly her Democratic ones, resent the fact that she has yet to appear at a debate. A few hours afterward, Leach mentioned her absence in a Facebook post and at one point during the event referred to her as “the candidate who’s not here today”. He once again hammered Margolies over her attempts in the past to change Social Security. The former Congresswoman is expected to attend the next debate on April 7th and if so she should expect her opponents to be eager to attack.