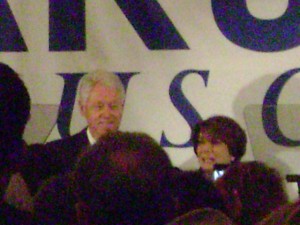 We’re starting to come down the homestretch and that means it’s time for the big guns, and they don’t come much bigger right now than former President Bill Clinton.

The forty-second President of the United States, and in-law to Marjorie Margolies, stopped by the Radisson Blu Warwick Hotel ballroom in Philadelphia to hold a pair of fundraisers on her behalf.

In the first public event, Margolies was praised by a number of local officials including Montgomery County Commissioner Josh Shapiro and former Governor Ed Rendell. Rendell compared her 1993 vote for Clinton’s budget that cost her her seat to one of JFK’s famous “Profiles in Courage” (various speakers mentioned her 1993 vote nine times by my count).

“She was a great congresswoman then, she has the courage of a lion and she will be a good congresswoman now,” Rendell said. The former Governor then went on to implicitly endorse her campaign.

“She is the best candidate in a field of good candidates,” he asserted.

Margolies introduced the former President and didn’t speak for very long herself although she did express her warm feelings for the 13th district.

“The Thirteenth District represents all that is great in this country,” she said.

“I would to say this right up front,” the former President began. “I would still be supporting Marjorie even if her son was not my son-in-law.”

Of course, Clinton was nonetheless making an extraordinary effort for the candidate, flying all the way from the LBJ Library, where he spoke last night to make it here. He actually incorporated his visit into the speech by connecting the 1965 Voting Rights Act to the controversial voter ID law in PA.

“We are still fighting for voting rights today and there are those who are trying to undo what was done then, including some in Pennsylvania,” he said.

The former President went on to list the accomplishments that Margolies helped pass the Congress like the Family Medical Leave Act, the Brady Bill and of course, the 1993 Omnibus Budget Bill.

After listing his own achievements, Clinton went on to defend President Obama’s healthcare reform by noting that 10 million people have gained coverage and describing the ACA as lowering the price and providing more coverage, while maintaining the same quality. In true Clintonian fashion, he also recounted the story of a woman he met on the way there who told him her premiums had gone from $525 to $140 because of the law.

The Secretary of Explaining Stuff also did what he does best, making a candidate’s case for them better than even the candidate can. For instance, while Margolies has often mentioned her 1993 vote, she hasn’t really connected that to why she should be elected now. So, her in-law took up that cause.

“I’m not here because of what she did 20 years ago, I’m here because what she did shows an ironclad commitment to public service,” he explained. “What happened before is a good indicator of what will happen in the future.”