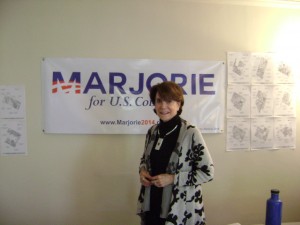 Marjorie Margolies is the highest-profile candidate in the race to replace Allyson Schwartz in Pennsylvania’s 13th district.

Famous for her one-term stint from 1993 to 1995 when she cast the deciding vote in favor of the 1993 omnibus budget bill, Margolies is once again seeking the 13th seat. I had the opportunity to talk to the candidate at her headquarters, a house that her campaign transformed into an office.

We talked literally at her kitchen table about the issues and dynamics of the Democratic primary. One interesting tidbit, the campaign produced massive blow-ups of photos of President Clinton and the Congresswoman together for their fundraiser and afterwards hung them up around the house. So it was that this interview took place under a giant photo of Bill and Marjorie from the 1992 campaign.

Motivations to run for Congress

I started with the question every candidate hears the most, why do want to run for Congress?

She says that she was as shocked as everyone else when she won and had displayed a healthy attitude towards her 1994 defeat. “So, I went in and was asked to leave. Bye-bye,” she summarized. Then after fifteen years of enjoyable work with her group Women’s Campaign International, another opportunity arose.

“Then when Allyson decided to run for Governor I got, it was probably a truckload, I got quite a few calls from people saying ‘Why don’t you look into this’ and that is how it started,” she explained. “I’m running because I never stopped dealing with the issues I thought were important.”

After I suggested that she seemed over the exhausting nature of Congress in some recent interviews she maintained that she loved the job and her memories of her service factored into her decision to “seize the moment.”

“I remember with great fondness what we were able to get done,” she explained. “I loved the constituent work, I mean I was shocked by how much we could get done on a 1-on-1 human interaction, how many people we could help.”

Next, we moved on to the subject of her three primary opponents and I noted that in every forum where she has been absent, they have taken the opportunity to hit her for ignoring the voters by not attending these events. Margolies clearly expected this question and was so enthusiastic she actually physically raised her hand to jump in.

“I would like to tell you the following, let me stop you in the middle of this. Do you how many times I debated John Fox [in 1992]?,” she asked. “Thirteen times, I set the bar for debates. We basically said when I got in this race that as soon as we knew who was gonna be on the ballot, when all the signatures were in, I would debate three times. That was it. I’m certainly not afraid of debating.”

When I mentioned my surprise that she attacked all her opponents in her closing statement at the Abington debate she attended she defended the legitimacy of her charges.

“Well, I really feel that way, I think they’re the issues we all agree on…but I can tell you Brendan Boyle and I, Planned Parenthood says he’s not 100% pro-choice and I do not think that you can replace somebody in this race in this district with somebody who is not 100% pro-choice. I think that’s very important and he does, he calls us millionaires. I’m not. I think that some of the most progressive members of the Senate and the House have been millionaires so I don’t think that’s an argument that holds a lot of water.”

We then moved on to her somewhat lackluster financial report and Margolies insisted that their campaign is right on track.

“We have run the race exactly the way we thought we should, exactly,” she asserted. “We knew what we had to do where, we knew what we wanted to do at this point. We are at this point where we want to be. We also knew that a load of our money, getting us onto television and everything like that, was gonna come in this fourth quarter. When Clinton came in. We knew that, it’s pretty simple.”

“The other thing is if you look at the polls and I’m sure you have, name recognition is very important. What does happen, if you have painted a target on your chest, they’re gonna come at ya, and if the question is was I ready for it, sure.”

Given her experience in WCI, Margolies has far more foreign policy expertise than the typical congressional candidate, so we tackled the most pressing foreign policy issue of the moment, Russia’s incursion into Ukraine.

“I actually went with a congressional delegation to Kiev and I was in Maindan Square,” she revealed. “It was right before the Orange Revolution. I talked to a lot of people and I can tell the people with whom we had conversations, the people in Maindan Square, wanted independence. There’s no question about that fact.”

“Now I think they are different places in the country where that changes,” Margolies continued. “It’s almost a ripple, as you move around the country and hear more people speaking only Russian. I think this is extremely confusing for the average citizen, people don’t know ‘Who are those people demonstrating outside, who are the people inside’ it’s a very hard [situation].”

Of course, there was the obligatory question on the Affordable Care Act and whether Democrats can turn it into an advantage in the midterms.

“I think this is the same type of thing as Social Security, when Republicans were initially against it. This is gonna need time, I think we’ve turned the corner with regards to expectations and numbers and things like that, it looks like we’re moving in the right direction.”

“We have to see how many young people sign up. Young people want healthcare,” she asserted citing her experience as a Professor at UPenn. “Anybody who says young people don’t care, that they think they’re invincible, that’s baloney.”

I also asked about her positions on Social Security, her 1994 bills to change the program and her opponents attacks that she will support changes to Social Security if she is elevated once more to office.

“I don’t wanna increase the age, I don’t wanna cut benefits…That is so intellectually dishonest,” she definitively responded. “When we were dealing with it when we had the entitlement conference 20 years ago, we had to put everything on the table. I don’t feel that way anymore. I think that Social Security is of the three [Social Security, Medicare and Medicaid], the least that we have to worry about. It’s the target on the chest, it’s just not true.”

I also inquired whether her 1994 bills were simply a political ploy, part of the well-worn tradition of members of Congress introducing bills that have no realistic chance of passage in order to grandstand or make a point. While Margolies agreed many members of Congress do this, she stated that her efforts in 1994 were not motivated by politics.

The made clear that the change she was referring to was the increase of the age of eligibility from 65 to 67. She also stated that she supports lifting the FICA tax cap on those making more than $500,000 a year.

“No, I do not think the age should be raised anymore, I am against that and I don’t think there should be anymore deductions,” Margolies said while comparing her opponents tactics to Newt Gingrich’s “Mediscare” methods. “These folks are trying to scare seniors into thinking that I want to cut their benefits. I do not and I don’t think we should raise the age anymore. It’s intellectually dishonest.”

“My position has evolved,” she concluded.

Finally, when asked to choose jobs or the deficit as our economic priority, Margolies insisted the two are intertwined.

“It’s all about growth,” she explained. “You grow the economy and the rest follows, it’s not about trickle-down. It is about growing the economy and once we do that and put more money in the hands of the middle class, they’ll spend it and it all kinda works its way into the middle.”

When asked what member of Congress would serve as a role model, Margolies talked about her admiration for Senator Elizabeth Warren and her efforts to bring a 21st century Glass-Steagall Act. She also praised Democratic leaders Nancy Pelosi and Steny Hoyer.

Concerning potential committees, she commented that “I had the best committees when I was there last time. And I would love to go back to those committees.” Margolies stated that she served on the Energy and Commerce Committee, the Telecommunications Sub-committee, the Small Business Committee and the Government Operations Committee.

Of course, we also talked about her famous 1993 budget vote and though she’s told the story countless times, one section stood out as an example of the former Congresswoman’s philosophy.

“I did know one thing,” she said at one point “and that is that it had to pass.”