Fresh off the heels of her announcement that she will be running to fill the soon to be open seat of Pennsylvania’s Thirteenth District, Margolies gave her first national interview last week to MSNBC’s Chris Matthews. 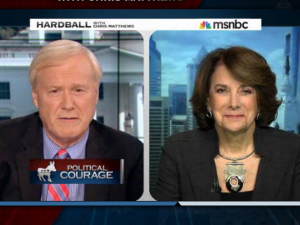 Matthews, a Philadelphia native, gaved Margolies a extremely warm welcome, going as far as to call her “my hero”. When asked by Matthews why she sought to return to Congress after a nearly twenty year absence, Margolies responded that she felt she had never truly left public service and that she had kept fighting the same battles throughout her career.

She did note, though, that part of her desire to return was that “I just think we, women, bring a different vision, view to the table”.

Matthews teased Margolies about this response “You’re pushing the fact that you’re a woman, especially I understand you’re running against two men. You’re giving away your strategy here.”

Unfortunately for Dr. Valerie Arkoosh, who filed to run last month, Matthews didn’t seem to know she was in the race. Margolies made no attempt to correct him.

The interview ended on a humorous note, however, as Matthews rattled off various facts about the district, with Margolies responding “I’m impressed! And you can get your deer cut up down there!”

But the biggest question remaining about the 13th district is this: will it contain any Clintons in the next 12 months before the primary? And will the former President stop in for a cameo and TV ad, or a fundraiser, too?

Speaking of Arkoosh, the physician and activist was on MSNBC recently to talk Obamacare (video below – “people will really come to love it.”)

She also launched a new website and has the endorsement of the Women’s Campaign Fund, one of just three congressional endorsees in the nation as of today.

“Women’s Campaign Fund is proud to endorse Dr. Val Arkoosh in her race for Pennsylvania’s 13th congressional district,” said Siobhan “Sam” Bennett, President/CEO of WCF in April. “Val is running for the seat that will be vacated by Congresswoman Allyson Schwartz, currently the only woman in Pennsylvania’s 20- person congressional delegation. At a time when women make up only 18% of Congress, this race is a must-win and Val has proven to be the most qualified candidate in the field.”

Scott Adams, Director of UAW Region 9 stated in their endorsement that, “Since he was first elected to the Pa. legislature in 2002, Daylin has demonstrated unmatched support for working families in Southeastern Pennsylvania. In countless instances, he has led the fight in Harrisburg to protect the middle class and preserve workers’ rights, while spurring economic development and creating more jobs. Our members know that he will bring the same fight to Washington that he’s known for in Harrisburg.”

And Leach continue to attract love from the netroots like a liberal magnet.

Wrote one author on DailyKos, “I am calling for the DailyKos community, as well as the rest of the netroots, to coalesce behind Leach, as it is time for the Democratic Wing of the Democratic Party to ensure that Marjorie Margolies remains a one-term congresswoman!”

Meanwhile, State Rep. Brendan Boyle Monday introduced HB1479, a bill that would prohibit the sale, purchase, or possession of large capacity ammunition magazines. The sponsors and supporters of Boyle’s bill, including fellow PA-13 opponent Leach, will hold a news conference on Wednesday in the Capitol Rotunda.

Boyle also held a fundraiser last week with the help of Congressman Bob Brady (D-Phila) that saw over 250 people attend according to the Philadelphia Public Record. The event was also a chance to showcase Boyle’s vast array of union support, as he has already secured the endorsement of the Pennsylvania Teamsters, the Fraternal Order of the Police, and several other local union chapters.

His campaign said John Dougherty of IBEW will be spearheading a fundraiser with other labor leaders on June 27.