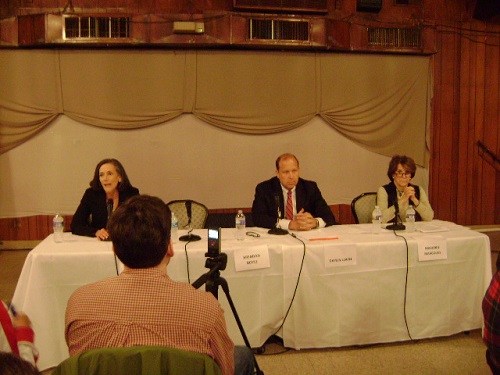 Last night was another compelling chapter in the increasingly entertaining saga that is the Democratic primary for Pennsylvania’s 13th congressional district.

This was supposed to be the second debate between all four Democratic candidates but just hours before it was scheduled to start, State Rep. Brendan Boyle announced he would boycott the debate because host and 56th Ward Leader John Sabatina Sr. is a supporter of Marjorie Margolies

As a result the forum had one less candidate – but it did not lack drama.

The State Senator laid down the gauntlet last week when he filed an FEC complaint against Marjorie Margolies and the interactions between these two competitors were the highlight of the contest.

The energetic candidate wasted little time in going after Margolies, pointing out that she was reading her opening statement from index cards. He described her as “reading word-for-word from color-coded notecards” and noted that she did this at the last debate.

Later when asked about his filing to the FEC, the State Senator asserted that Margolies had yet to provide a clear answer.

“This was not accidental,” he said of Margolies’ actions. “She broke the law. Even tonight she has not explained what happened. She knows the FEC will not come back before the election so now she is just trying to run out the clock.”

He went on to criticize Marjorie for her famous 1993 budget vote, pointing out that she initially voted against it and stated that she only changed her mind because she made a “deal” with President Clinton.

Leach also went after Boyle for boycotting the debate and characterizing all his opponents as millionaires. He contended that Boyle’s attacks are an attempt to distract from his record on abortion and compared him to Mitt Romney in terms of flip-flopping on the issue. Finally, he took exception to Boyle describing him as wealthy.

“I would’ve killed to have Brendan Boyle’s upbringing,” Leach stated.

The ebullient candidate had the fewest issues with Arkoosh although one disagreement between the two illustrated Leach’s view of public service. It came in a response to Arkoosh’s statement that she was not a career politician.

“You know when I go to the doctor’s I don’t want a career anesthesiologist, I want someone who dabbles in it from time-to-time,” he joked before transitioning. “I don’t know why you would want to join a profession that you respect so little.”

Whereas in her first debate performance the former Congresswoman waited until the end to issue her rebukes to each candidate, this time she began with them in her opening statement.  She again critiqued Boyle as “multiple choice” on abortion, called out Leach for attacking her and not living in the 13th district, and held up a piece of direct mail the Arkoosh campaign sent out concerning her past proposals for Social Security reform.

Much more than last time, though, Margolies was forced to defend her record. In response to her past positions on Social Security, the former Rep. sought to put those questions to rest.

She went on to reiterate points she made in her one-on-one with PoliticsPA that her opponents were being “intellectually dishonest” on this point and that she had simply “evolved” on the issue.

“Sen. Leach has filed an FEC complaint, we will file an answer to that complaint, then we’ll see what the FEC does,” she said.

Somewhat surprisingly, moderator Tom Waring of the Northeast Times did not press her to explain further or answer Leach’s charge that she used general election money during the primary.

Overall, the dynamic between the two throughout the debate was almost comical. They were seated next to one another and the contrast between Leach’s hyperactivity and Margolies’ cool demeanor further emphasized their differences and seeming lack of affection for one another.

For the most part Val Arkoosh was removed from the Leach-Margolies conflict, if only because Brendan Boyle’s empty chair separated her from them.

She also hit Boyle for skipping out and portrayed his attempt to get his opponents to release their tax returns (a challenge that every one but Arkoosh has done at least in part) as a ploy to distract from his position on abortion.

“I think it’s interesting he is raising this issue as his record on women’s health comes to attention,” she stated.

Arkoosh also called for expanding Social Security in contrast to Margolies’ past efforts to cut benefits. Additionally, she sought to claim the high-ground on campaign spending by emphasizing trust and following the rules without getting dragged into the battle on the other side of the table.

Conspicuous by his absence was State Rep. Brendan Boyle who chose to boycott the event and campaign in the area instead. Yet his empty chair was its own kind of strange participant and his opponents felt free to go after him.

Boyle told the Philadelphia Daily News that the debate host, and the debate rules, were his reason for skipping. Adding to the curiousness of the decision is the fact that Boyle had one of his finest moments during their Abington debate when he rebuffed Margolies in his closing statement.

All three candidates endorsed medical marijuana, including former Rep. Margolies, who memorably brought up a DUI death when denouncing Leach’s advocacy for recreational marijuana legalization at her previous debate appearance.

Arkoosh and Leach each came out against approving the Keystone XL pipeline while Margolies chose to defer to the Obama Administration while their study of the project is still ongoing.

Finally the event, held at the Philadelphia Portuguese Club, was well-attended and went off fairly well. The only major issue was that a photographer would frequently take close ups of the candidates while they spoke. In fact, several times he snapped photos of Margolies just inches away from her face while she was giving answers, thereby obstructing the view of, and generally annoying, the audience.