Going into 2016, Democrats were hoping to add PA-6 and/or PA-7 as another competitive Congressional race in Pennsylvania alongside PA-8.

Neither of those elections were able reach the next level but a surprise emerged out of central PA.

The PA-16 contest has surprisingly become that second opportunity. Last month, the DCCC named it an emerging race and the Cook Political Report moved it from “Solid Republican” to “Likely Republican”.

While the GOP seems to have a good candidate in State Sen. Lloyd Smucker, the fact that incumbent Congressman Joe Pitts is retiring makes this the best shot the Dems will ever have at this seat.

Not to mention “the Trump factor”.

So what would flipping PA-16 involve? To determine that we can take a look at a 2012 presidential map of the district broken down by voting district. 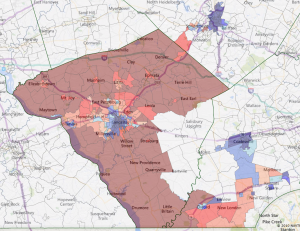 The President took advantage of the cities included in the district by easily winning Reading, Lancaster and Coatesville. Reading’s suburbs aren’t really included in PA-16 but those of the latter two cities are. Obama did well south of Coatesville, yet only OK in the areas outside of Lancaster. Overall, the massive maroon red of Lancaster County proved too much.

Compare that to Rep. Pitts’ performance against 2012 Democratic nominee Aryanna Strader (two independents in this race also siphoned off about six percent of the vote). 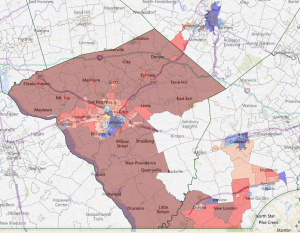 As you can see Pitts performed much better than Romney just about everywhere. The key spot, though, are the suburbs around Lancaster. Townships like West and East Hempfield, West and East Lampeter and Manheim.

Hartman’s team should also look at trying to pick off some boroughs in Lancaster County where the shades of red are lighter. Several visits to small communities such as Elizabethtown, Ephrata, Lititz and Mt. Joy may well pay off down the line.

Nonetheless, the advantages enjoyed by the Republicans in the more rural areas of Lancaster County and the Southwestern part of Chester County are intimidating.

Hartman would have to run an extraordinary race, but there just may be a chance if the electoral winds shift her way.