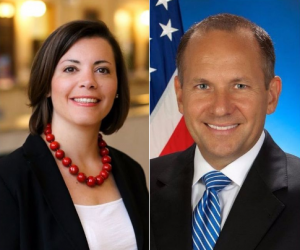 With the race in PA’s 16th Congressional District heating up, we took a look at the latest campaign finance reports for the two candidates vying to replace 10-term Congressman Joe Pitts.

Though the 16th district has voted for GOP Congressman Pitts for the last 20 years, the state of politics in 2016 could see the race swing either way.

The second-quarter reports cover all campaign finance activity from April 7th to June 30th, giving an insight into how Smucker and Hartman fared both before and after the Apr. 26th primary.

Over the course of the 12-week reporting period, Smucker pulled in almost $470K, though $280K – 60% – came from personal loans from the candidate himself.

Political action committees (PACs) contributed $106,499, while individuals kicked in $83,580 in the second quarter of 2016. The average individual donation to Smucker’s campaign was $1,025.

Smucker for Congress has $203,085 in cash on hand as of June 30, almost doubling its stockpile since the end of the first quarter. However, the campaign also has over $662K in loans to repay, including a debt of more than $450K to the candidate.

On the other side of the ballot, Hartman almost doubled her money from the first quarter, with $170K coming into the campaign over the last three months.

Hartman’s individual contributions for the second quarter totalled $132,505, with an average donation of $356.

Hartman spent just over $91K in Q2, allowing the campaign to grow its cash on hand from $127K at the end of March to $205,611 as of June 30th. The George Washington University and Fordham University graduate owes $68,183 to various vendors.

Most of Smucker’s contributions came before the primary, with 56 individual donations totalling $48,800 and 21 PAC donations for $39,999 rolling in. On the day of the primary, Apr. 26th, Smucker brought in another $13K from PACs.

Smucker supplemented his primary warchest by making $60K and $65K personal loans to the campaign on Apr. 18th and 20th, respectively.

On June 30, the last day of the reporting period, Smucker raised over $127K, including a personal loan to the tune of $80K, significantly boosting his overall second-quarter fundraising performance.

The majority of the $370K Smucker spent in Q2 went to Pittsburgh firm BrabenderCox for five pre-primary ad buys ($200,691).

On the eve of the primary, Smucker spent over $20K on direct mailing services from Harrisburg-based LN Consulting. The campaign has paid CMC Consulting of West Chester $12K over the last three months for fundraising consulting, while Campaign Financial Services has picked up almost $7K for FEC compliance consulting.

Hartman was able to be much thriftier with her spending without a primary race to run. Of the $91K spent, Hartman spent almost $42K on staff salaries, her biggest expense of the second quarter.

Hartman has spent $13,500 on media consulting from LillaBlu Strategies of Marlborough, MA, $7K on fundraising consulting from DC-based Generate Changes and around $2,400 each to GPS Impact and NGP Van.

The Hartman campaign has $68,183 in debts to repay, including five personal loans from the candidate totalling $55K.