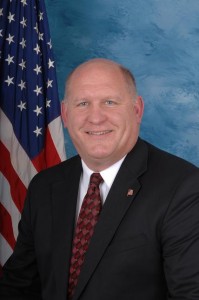 Rep. Glenn “GT” Thompson (R-Centre) has proved that he can raise and keep cash like an incumbent, definitively outraising Democratic opponent Kerith Strano Taylor. The other Dem in the race, Thomas Tarantella, has yet to file a report.

Thompson’s report lists a lengthy number of donors, both individual and organization. Notably, he received $1,500 from the Koch Industries PAC and $3,000 from the coal company Alpha Natural Resources PAC.

The Congressman also managed to spend his money like an incumbent, clocking in at a bit over $110K. $25,257.86 of that went to advertising and public relations, which seemed to take up the most space on his list. There was also, of course, fundraising, payroll and various travel fees.

Despite her attempt to run a Congressional race against an incumbent, Taylor’s campaign finance report doesn’t do much to reflect that. Most of her donations came from individual donors, with only two organizations gifting a grand total of $200. Her biggest donation of $2,600 came from Eric Haggerson, who’s listed as Senior of Regulatory Affairs at T-Mobile. There were also many in-kind donations from her law firm, aptly named Taylor Law Firm.

Taylor announced her intent to run on a snowy morning back in February. Thompson’s other Democratic opponent, Tarantella, beat her to the punch with an announcement in December of 2013, but has yet to post his finance report from the first quarter of 2014.

Thompson has a history of easily keeping his seat in the 5th district. Most recently, in the 2012 election, he garnered 62.9% of the vote against Democrat Charles Dumas’ 37.1%. The district is rated R+8 on the Cook PVI scale.