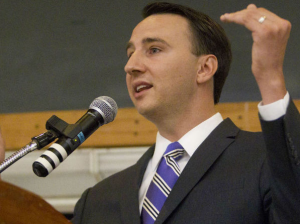 A new conflict has broken out in the PA-6 congressional contest.

This one is over financial disclosure forms.

A FEC formality, the Costello camp is criticizing Parrish for not filing one either this year or last year. They believe that lawsuits against the Democratic nominee in other states are the culprit, alleging that there is something there that Parrish doesn’t want revealed.

“Until now we have viewed Mr. Parrish as a desperate political opponent,” Costello Campaign Senior Advisor Vince Galko stated. “It is now clear that the states of Pennsylvania, Louisiana, Hawaii and his bank, as well as, those who have done business with him are all correct in pointing out that he is also a fraud.”

“Trying to turn a bureaucratic oversight into a scandal shows just how desperate Mr. Costello is to distract from the real issues in this campaign, and is particularly laughable for a member of Congress who didn’t make it through half of his first term before finding himself the subject of an ethics complaint for selling his legislative agenda to the highest bidder while still a candidate,” Mike Parrish added. “Mr. Costello started his Congressional career by selling out his constituents, and unsurprisingly, it has become a disturbing pattern. From the Patriot Program, to the NRA to his support for Donald Trump, a bigoted racist, for President, Mr. Costello has shown time and again that he puts self-interest, special interests and party before country. Given how badly Mr. Costello has sold out our community, it’s no wonder he wants to change the subject. We can do better.”

PoliticsPA also asked about the allegations the Costello team made about the lawsuits.

“Mr. Parrish isn’t trying to hide anything,” Bachman answered. “This was honestly a clerical error at the Clerk’s office. Mr. Parrish proactively reached out to them to initiate the process, and is working with them to file his disclosure, which will list his assets and liabilities as required.”