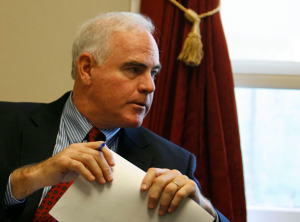 Last week saw yet another development in the PA-7 congressional election.

In December, Lindy Li left the Democratic primary to run in the PA-6 race instead.

“My Congressman, Pat Meehan, hides out in a carved up, gerrymandered district that is designed to be a ‘Republican Safe Seat’, but his voting record is anything but Republican,” Casacio writes. “In fact, Conservative Review gave Pat Meehan a conservative rating of F: 31%. And the Heritage Foundation gave him a failing rating of 36%.”

“I am running to give Republican voters a choice and the opportunity to have a representative who will do what is right rather than what is politically convenient,” Casacio pledged.

Congressman Pat Meehan has served since 2011 and is seeking his fourth term. On the Democratic side, 2014 nominee Mary Ellen Balchunis is competing with pastor Bill Golderer.