The Eighth Congressional District is set to be the battleground for PA’s biggest House race of 2016.

This is the result of incumbent Rep. Mike Fitzpatrick’s impending retirement.

A former Bucks County Commissioner, Fitzpatrick first won election to Congress in 2004. In 2006, he lost a tight race to Iraq War veteran Patrick Murphy in the midst of a Democratic wave but won a rematch in 2010 amid a Republican wave.

In 2012, despite President Obama carrying the state, Fitzpatrick defeated his Democratic opponent Kathy Boockvar 57% to 43%. 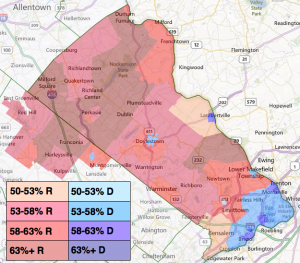 In 2014, another strong GOP year, the Bucks native ran against Iraq and Afghan War veteran Kevin Strouse. Strouse was persuaded to move to the district by the DCCC in 2013 to run against Fitzpatrick. While the Democratic nominee was labeled a “carpet-bagger”, this is actually a fairly common tactic for both parties in congressional races. Apparently, though, the voters didn’t care. 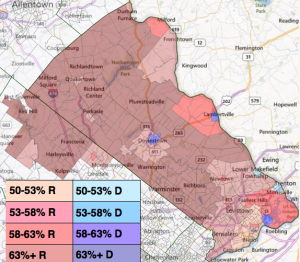 That sea of red is likely the high water mark for a Republican. Fitzpatrick, a well-known local pol was running in his last race against a little-known rookie in the midst of a GOP year. The incumbent ultimately won by a 62% to 38% margin. The Congressman carried sixty-two of the district’s sixty-seven municipalities, including 32 that went for Governor Wolf.

All this shows just how difficult Fitzpatrick will be to replace.

Lt. Governor Jim Cawley, another former County Commissioner, would likely have the best opportunity. Cawley is a native of Bristol Township, a part of Democratic Lower Bucks that Fitzpatrick proved in the last two cycles is accessible to the right kind of Republican.

If Cawley passes on a congressional run and decides to try for a statewide office (a real possibility) another prime candidate would be State Rep. Scott Petri. Petri has represented the 178th district since 2003, so he has some name recognition but the Upper Makefield and Richboro areas are already red.

As for the Democrats, only one candidate has thrown his hat into the ring so far, State Rep. Steve Santarsiero. Santarsiero was elected in the 31st district in 2008 and would have an advantage when it came to places in his district like Lower Makefield and Newtown. Add to that Democratic Lower Bucks (especially if neither Fitzpatrick or Cawley is the GOP nominee) and he’d have a real base of support.

Here is a map of Patrick Murphy’s 2006 victory over Fitzpatrick to illustrate: 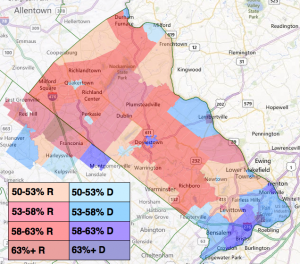 Note: PA-8 was differently constructed in 2006 but this is what the results would’ve looked like under the district’s current makeup.

The big question mark in the Democratic primary is 2014 candidate Shaughnessy Naughton. The Point Pleasant native came very close to pulling out an upset over Strouse last year. She lost by just a 817 margin while being vastly outspent. 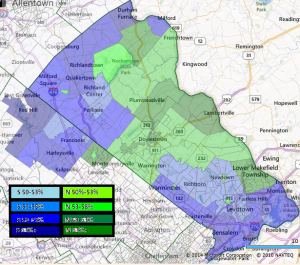 In terms of the map, Naughton (represented in green) would appear to have one large advantage and one distinct disadvantage. She ran very strongly in Central Bucks but a big part of her support also come from Santarsiero’s Lower Makefield.

As an experiment, I calculated the totals for both Naughton and Santarsiero in the 31st district when they shared a ballot in May 2014. Naughton was running against Strouse while Santarsiero ran unopposed. The State Rep. pulled in 3,965 votes while Naughton received 2,333.

Nevertheless, the PA-8 race should be exciting as candidates try to find their own path to victory. Unless, party leaders talk Fitzpatrick into running again.