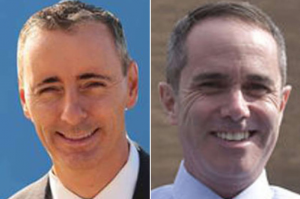 It’s still early so the nominees in the PA-8 open race are only attacking one another with smiles.

A “civility pledge” has become a major point of contention in Pennsylvania’s most (only) competitive Congressional contest.

After being stung by some attacks, GOP nominee Brian Fitzpatrick first proposed a pledge in March. Then, at the conclusion of a particularly bruising Democratic primary, the Bucks County Courier-Times called for one as well.

This week, Fitzpatrick reaffirmed his commitment to sign the pledge and challenged Democratic nominee State Rep. Steve Santarsiero to do so as well. The younger brother of the retiring incumbent also called for three debates in the fall.

The next day, the Santarsiero campaign responded.

“We pledge to conduct a civil and respectful campaign that focuses on the issues and avoids personal and defamatory attacks. And we call upon our opponent and all other organizations who may get involved in the race – on either side — to follow our lead.”

The Democratic nominee, however, wants to focus more on issues than civility. Concerned that such a pledge would shut down a discussion on subjects like climate change, the Santarsiero team instead proposed a regular series of debates.

“The time is now to begin debating the issues. This race is too important to wait until the closing weeks of the campaign to give voters unfiltered access to the candidates’ positions. We propose we begin debating this month, with at least one debate following every month between now and November 8,” said Santarsiero’s campaign manager Eric Goldman. “We invite the local press corps to join both candidates and serve as moderators of the first debate.”

The Fitzpatrick camp accused his opponent of breaking a promise to the voters.

“On March 4, 2016, I issued a Civility Pledge to my opponent, calling on him to run a positive, issue-focused campaign that was free from personal attacks. I signed this pledge in the presence of the Bucks County Courier Times, who encouraged my opponent to sign this pledge. My opponent refused to do so,” Fitzpatrick responded. “On March 15, 2016, my opponent announced that he would be offering a civility pledge of his own for the candidates to sign. Not surprisingly, he never did so, and what resulted was a bitterly negative primary campaign between Santarsiero and his opponent.”

He went on to criticize Santarsiero for not signing the newspaper’s pledge.