You know those pieces of political-related mail you shove into the trash with the coupons and menus?

Well those fliers, called “direct mail”, are still one of the most important parts of campaigning and they’re at the center of a controversy in the PA-8 Democratic primary.

It all began with a piece of direct mail from 314 PAC. What is 314 PAC? It is the political action committee that was created by Shaughnessy Naughton in 2014 after her first Congressional run.

Now Naughton is separated from the PAC thanks to campaign finance law, although it’s not a stretch to say that an organization created by her has her best interests in mind. 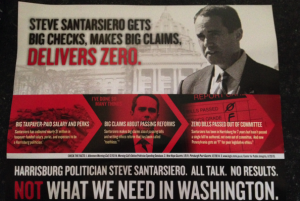 The flier in question concerned the legislative record of State Rep. Steve Santarsiero, who was chastised for not passing any bills during his tenure in Harrisburg that began in 2009.

This maneuver, however, caused a problem as Doylestown Council President Det Ansinn made it known that he intends to file an FEC complaint. It wasn’t long before James Boyle of the Courier-Times and Justine McDaniel of the Inquirer were writing about Ansinn’s pledge.

Ansinn is a board member of 314 PAC and supported Naughton’s 2014 campaign. This time, though, he is backing Santarsiero. His complaint specifically relates to Naughton’s fiance Josh Morrow, who was consulting for both the PAC and the Naughton campaign in 2015. Ansinn points to a 120-day cooling-off period when an aide moves from one organization to another.

Meanwhile, the Naughton camp is brushing off the charge and trying to turn the issue back to Santarsiero’s record.

“Steve Santarsiero has been exaggerating his legislative record to voters in the mail. He says he wrote the law to close the background check loophole, but he didn’t. Pennsylvania does not have a universal background check law. So, if we can’t believe what Steve says about his own record, why should we believe what he says about anyone else’s? This is nothing more than political stunt by the campaign,” said Naughton Campaign Manager Erik Polyak. “The Santarsiero supporter who filed this should apply for a job as Steve’s press secretary, since he’s definitely not a lawyer. This letter has no legal merit, it’s just a press stunt. It’s just another example that you can’t trust what Steve Santarsiero says.”

Yesterday, the Naughton’s campaign sent out an email accusing Santarsiero of lying about his record in his own direct mail piece. 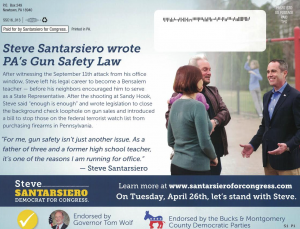 In that flier the Santarsiero campaign claims he “wrote PA’s gun safety law”. While the State Rep. has written several bills, including two concerning background checks, none have passed. Additionally, in an email the Santarsiero also stated the legislator “passed over 54 bills” when he actually just co-sponsored those eventual laws.

“A pathetic political stunt timed to distract from the real story, which is that a board member for Naughton’s own Super PAC has accused Shaughnessy Naughton of breaking federal law. If Shaughnessy Naughton and Josh Morrow’s response to a smear campaign from a shady Super PAC that they founded and ran until just weeks ago, is to feign cluelessness, then they are insulting voters’ intelligence,” Santarsiero Campaign Manager Eric Goldman told PoliticsPA. “Voters know that for years, Steve Santarsiero has been the leader in Harrisburg fighting for gun safety and his record on the issue is second to none. Just ask the hundreds of parents, community leaders and activists who have marched with Steve and fought for progress, which candidate in the race they trust to continue fighting for common sense gun reform.”

With a contest this close, and this toss-up open seat so valuable, expect this race to get exponentially more heated as we approach April 26th.