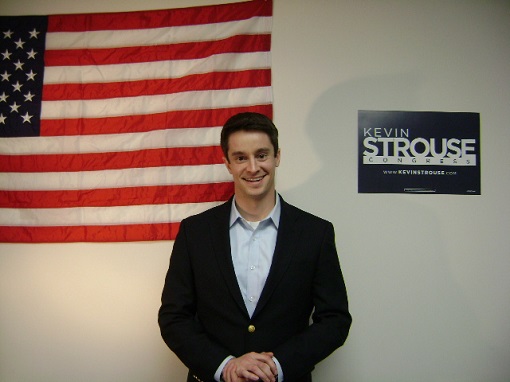 Kevin Strouse is a first-time candidate seeking both his party’s nomination and to defeat an incumbent Congressman.

Strouse is an ex-Army Ranger who served in the wars in Afghanistan and Iraq as well as a stint in the CIA Counterterrorism Center. His primary opponent is businesswoman Shaughnessy Naughton, who we interviewed last week, and they’re aiming to unseat Rep. Mike Fitzpatrick (R-Bucks).

We were able to sit down with Strouse for an exclusive interview and asked about what motivated him to run for Congress, what are the differences between him and Mike Fitzpatrick and what his views are on various policy questions.

Motivation to Run for Congress

To begin with, we got straight to the heart of the matter. In a time when government service is not considered an especially noble profession, why would someone want to run for, and potentially serve in, Congress?

“In my professional life I’ve always tried to go the areas where we’re facing the biggest problems in the country,” Strouse responded. “So after college I enlisted into the military, I joined the Army Rangers, was deployed to Afghanistan three times and Iraq once. After that I volunteered to join the Central Intelligence Agency where I where worked for eight years on the toughest problems facing this country and where we would answer questions coming straight from the President, because these were the most important issues facing us.”

“Now, in addition to running, I work for an educational not-for-profit called Teach to Serve which works with high school students in the region to get them involved in the community because I really do believe in service to the country and service to the community. I compare that to our Congress right now, which really has done nothing. I’ve always sought out the toughest problems and right now our toughest problem is our Congress. To me, they represent a failure in leadership and accountability.”

The candidate then transitioned from his professional to his personal background, highlighting the lessons he learned from his ancestors and his concerns for his own children.

“My grandfather was a custodian who was able to raise four kids on a custodian’s salary. My mother was able to put herself through school, the first in her family to go to college, working as a waitress. I look at my kids now, would my son Wally be able to support a family of four as a custodian? Would my daughter Charlotte be able to put herself through college, if she needed to, as a waitress?” he posited. “And the answer is no. That’s not the America I know, I’ve seen how America works because it’s worked for my family and that’s why I’ve been willing to put my safety on the line for my country because I believe so much in these Democratic values.”

Strouse expressed clear views when it came to what seems to be the central question in our current political discourse; should our main priority be jobs or the debt/deficit?

“My priority is growing the middle class again, creating jobs that pay good wages where those wages can go up and grow the middle class,” he stated. “And that will take care of the deficits and that will take care of the debt. One of issues right now is we’re collecting so few taxes relative to GDP because we’re not creating enough jobs and the people that are working, their wages aren’t going up. If you start building those jobs, you have more people paying taxes and that will help address that debt over the long term. So for me, that has to be our priority, creat jobs to grow our way out of debt.”

“The plan I’ve offered addresses these core issues. The first is in the near-term we need more investment in infrastructure. We need to invest in our roads, in our bridges and in our electrical grid. That puts people to work now and it also creates an environment where people want to start businesses here, where this is a 21st infrastructure.”

“The second piece of it is investment in education, I do have two young kids, my son is three and a half; my daughter will be two next month. They go to a preschool and seeing how much they learn, every child should have that opportunity and that’s why I believe in early childhood education.”

An Afghan and Iraq war veteran, Strouse has a deep foreign policy background that makes him stand out from most political candidates. Therefore, we asked him about his views on America’s role in the role world.

“I do believe that U.S. values are good for the world, particularly our respect for civil liberties and our respect for democratic values, “one person one vote”. I do think those are the sort of principles we ought to be encouraging abroad. Now that doesn’t necessarily mean invading countries to force that on people, but I do think our values are good for the world and I do believe in a strong U.S. foreign policy that engages with the world.”

He went on to critique the emerging feeling, especially among liberals and libertarians, that the U.S. should seek to withdraw somewhat from the world.

“And there are people on both sides of the aisle right now who are trying to pull that back and move towards more of an isolationist bent, so I don’t agree with that at all. I know we like to ignore foreign policy when it doesn’t directly confront us, but it is one of those things that will come up and bite you if you don’t pay attention to it.”

Strouse also made clear that he believes the U.S. can not allow Iran to obtain a nuclear weapon yet he supports the Obama Administration’s recent negotiations as a good “interim step” while asserting that additional sanctions can be applied if Iran were to back out.

Strouse described the relentlessly debated Affordable Care Act as an improvement and again blasted Congressional Republicans for, in his mind, doing nothing but obstructing.

“The ACA is certainly better than where we came from,” he explained. “What’s not a plan is to oppose something fifty times, voting fifty times to let insurers decide when you have a pre-existing condition and are no longer eligible for insurance. That’s where we came from. Fifty times for these votes when they knew it had no chance. So what you’re seeing there is a Congress that’s willing to play politics with people’s health and I think that is completely unacceptable, again represents a complete failure of leadership, and not to mention compassion and empathy for your fellow Americans. Certainly, that has been a ridiculous approach.”

While Strouse did identify some concerns like containing costs, he cited the story of a Doylestown resident named Julia to explain why the ACA was necessary. Years ago, the woman’s mother paid for a breast cancer test under the table because she feared a positive diagnosis would lead to the loss of her insurance.

The candidate also had an intriguing response when asked about the struggle Democrats have faced in conveying their message to voters.

“For the Democrats to be more successful in promoting not only the health care law, but any of these things like investment in infrastructure, we need to start humanizing these issues because it seems like some abstract thing” he asserted. “We need to tell these stories about here’s who we have helped and their stories are just starting to trickle out. The Republicans have been a lot more effective at scaring people. So what the Democrats, particularly President Obama, needs to do in my opinion is stand up and start saying here’s the people it’s helped. If they didn’t have insurance they’d be bankrupt or dead because they developed these conditions that prior to the ACA would’ve been viewed as a pre-existing condition. I think that the Democrats need to start pushing the good news out there. There are issues with this law, it certainly needs tweaks and we need to address the health care inflation but it’s certainly helping people as well.”

Finally, we asked Strouse how he expects to defeat the incumbent Congressman Mike Fitzpatrick, who has won three out of four fights for this seat.

“This is the most unpopular Congress we’ve had in memory and people understand Fitzpatrick is part of the problem here,” Strouse said. “He hasn’t shown any leadership on these issues, this country and this community is facing a lot of problems and we have a Congress that is unwilling to do anything about it right now and that includes Congressman Fitzpatrick. We need people who are gonna stand up and show leadership and put their head out there and actually take some political risks.”

The military vet also attacked Fitzpatrick for his votes to shut down the government while the VA remained backlogged.

When asked how he expects to make his voice heard among the other 434 members of the House, Strouse cited his work with the CIA when he often faced colleagues who disagreed about the difficult intelligence issues they faced. They were able, however, to continue to work together until an agreement was finally set, a development which he pointed out doesn’t happen in Congress anymore. The former Army Ranger was especially offended by the way that body continually blows past deadlines without resolving their issues.

The candidate also asserted that he will distinguish himself from the rest of the congressional pack through his constituent services.

“One of my priorities as a Congressman will be to make sure I have the best constituent services of all 435 members. I think that is incredibly important, first of all to make sure you’re in touch with your constituents and secondly to also make sure you’re there to help people as they transition to start a business or try to find a job.”

He identified the House Transportation and Intelligence Committees as places he would like to serve if he were elected. When asked about congressional role models, Strouse cited Patrick Murphy’s success in bringing a green energy hub to the district and repealing “Don’t Ask, Don’t Tell” along with Joe Sestak’s work ethic. (Murphy has been a big unofficial backer of Strouse and his wife endorsed him last month).

At one point in the interview, the candidate was able to perfectly distill his message of sacrifice and service stating, “If you work hard you should get an equal shot to succeed and I believe in that so much I was willing to risk my life to protect those values. I’ve shown I’m willing to put country above myself and community above myself.”