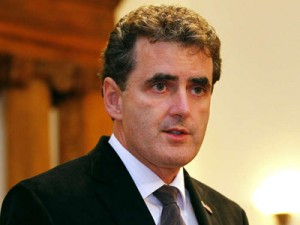 The Fitzpatrick brothers, Mike and Brian, are facing questions about their activities in late 2015.

According to Scott Bland of Politico, Congressman Mike Fitzpatrick was making calls on his brother’s behalf while Brian was still working for the FBI.

“Mike had been making calls for months” one Bucks County Republican told Bland. “For months, maybe longer than that. … ‘Hey, I’m your congressman, look at the job I’ve done, I want you to support my brother.’”

“Mike was saying to people, my brother is looking at it,” another Republican remembered. “Wouldn’t Brian earn some of your consideration and support even though he can’t voice it?”

Fitzpatrick apparently started pitching his brother to others around Thanksgiving of last year, while the younger Fitzpatrick has said he didn’t resign from the FBI until January.

There is nothing new or even shocking about this type of activity. It goes on all the time. The problem, though, is that technically it’s illegal.

Under the Hatch Act, federal employees are prohibited from any “preliminary activities regarding candidacy”.

“The Hatch Act is a prohibition not only on formal candidacy, but on pre-campaign activities,” former FEC general counsel Larry Noble said. “”Even if [Mike Fitzpatrick] was doing it of his own accord, it at least reflects the fact that the brother who is running now was thinking about running and was taking preliminary steps…Any steps would be in violation of the Hatch Act, and it’s hard to imagine a situation where your brother would be soliciting support if you hadn’t done something to prompt that.”

PoliticsPA reached out to the Fitzpatrick campaign but did not receive a response.

UPDATE: “The last thing Bucks and Montgomery county voters need is another Washington or Harrisburg insider representing them in Congress. I hope the FBI investigates whether Brian Fitzpatrick was politicking on the taxpayer dime,” said Naughton Campaign Manager Erik Polyak.

“If the troubling allegations are true, and Mike Fitzpatrick was indeed making illegal calls on his brother’s behalf while Brian Fitzpatrick was still living in California and working for the Federal Government, that would have been a clear violation of the Hatch Act. If true, that would raise serious questions for which the public should demand answers. No one should be above the law.”

“These unfounded and anonymous accusations are just more dirty tricks from a political machine threatened by Brian Fitzpatrick, a former FBI Special Agent and federal prosecutor, whose candidacy is focused on changing the status quo.

With a dirty trick website against Brian Fitzpatrick being the subject of a Federal Election Commission complaint this week, attacks like these are why people are disenchanted with the political process.

Brian has an unblemished FBI record protecting our country. He is calling for a Civility Pledge for all candidates. These dirty tricks need to stop. Voters demand better.”