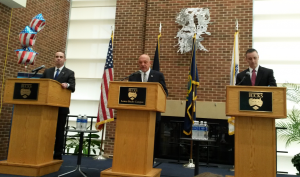 On October 13th, the two candidates for the open PA-8 seat faced off in their second and likely final debate.

The forum was moderated by professor Bill Pezza.

Fitzpatrick, the younger brother of the retiring GOP incumbent Congressman, sought to emphasize his roots. Santarsiero has often attacked Fitzpatrick for leaving California, where he was working for the FBI, to move back here earlier this year in order to run for this seat.

“I’m a life-long resident of Bucks County. I grew up right down the road,” he began while talking about the local schools he went to and his familial connections in Bucks.

He expanded upon his background in the FBI and as a prosecutor as well as identifying his two main goals as growing the economy and defending the homeland.

Santarsiero recounted how he gave up his legal career to become a teacher after 9/11. He stated that his experience in that position inspired him to go into public service and become a legislator.

The Democratic nominee advocated tax cuts for middle-class families that would be paid for by closing loopholes used by the wealthy to game the system. For the first, but by no means the last time, Santarsiero mentioned Donald Trump.

“Just the other night, we had Donald Trump more or less admitting that he hasn’t paid taxes,” Santarsiero stated. “One thing that I’ve heard throughout this district is they think the system is rigged.”

“I agree with Steve that the system is rigged alright. It’s been rigged by politicians,” Fitzpatrick responded.

Santarsiero lamented the drop in real wages over the past few decades for the bottom 90% of Americans. He also highlighted his own experience.

“As someone who’s actually brought jobs into this district and has fought to protect the jobs of thousands of families in our district, I can tell you from day one that’s exactly what I will do as your Congressman.”

Pezza then moved the debate to foreign policy. Like in the August debate, he again brought up North Korea, which appears to be a favorite topic of his. The moderator wanted to know if pre-emptive action might be necessary against that nation.

“We need to be proactive for sure,” Fitzpatrick answered while cautioning the audience about North Korea’s latest nuclear test.

He then went on to criticize the Obama Administration’s deal with Iran to stop their nuclear program. Fitzpatrick pointed to his FBI experience to prove he knows how best to counter these threats.

Santarsiero reiterated that he was against the Iran deal and was able to steer the conversation back to Trump. Specifically, he warned about Trump’s comments about nuclear proliferation and Vladimir Putin.

“I raise that because the fact is up until about six days ago, my opponent was voting for Donald Trump,” the Democrat explained. “He thought it was OK to give him the nuclear codes. I think that’s an important issue in this campaign because it goes to the issue of judgment.”

Fitzpatrick stated in July that he would vote for Trump but abandoned his party’s nominee after the recent revelation concerning Trump’s remarks about women in 2005.

Instead of fighting his opponent on that terrain, however, the Republican candidate sought to turn the issue back to Iran. Fitzpatrick noted that in the Democratic primary debate Santarsiero said that he supported the implementation of the nuclear deal.

“I think that is incredibly dangerous,” Fitzpatrick stated.

“I think what’s dangerous is supporting a man, up until just last Saturday, who is on record saying he would encourage the proliferation of nuclear weapons,” Santarsiero shot back, turning the focus on Trump again.

The debate then moved to the topic of domestic surveillance and how to balance that with privacy.

Santarsiero used this as another opportunity to mention Donald Trump, citing his ban on Muslim emigration as an impediment to cooperation with allies in the Arab World.

“Once again on this topic, I’m speaking on it not as a politician who’s talking about it, but someone who’s done it,” Fitzpatrick countered.

The moderator then transitioned to infrastructure projects, specifically how large such a program would be and how would it be paid for.

The Republican nominee believes that growing the economy is the key to affording these improvements.

The Democratic nominee pointed to his support of the transportation bill Governor Corbett signed in 2013. He also advocated floating bonds and an infrastructure bank to pay for the program.

“I just think it’s interesting that I want to grow our way out and Steve wants to add debt to solve our problem,” Fitzpatrick remarked. “You’ll see that distinction a lot between the two of us.”

“Let me tell you something. For decades, for decades in this country, we’ve funded programs like this through bond issues,” Santarsiero responded. “Just saying it’s gonna happen through growing the economy is a non-answer.”

The next issue was trade deals. Pezza accused candidates for office of using populism as an excuse to not move on an issue with bipartisan support.

Santarsiero lamented the lack of worker and environmental protections in TPP while Fitzpatrick laid the loss of jobs at the feet of trade deals like NAFTA and CAFTA. 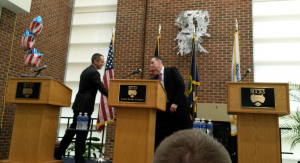 Pezza asked how to expand coverage and control costs.

“I believe health insurance is a right and not a privilege,” Fitzpatrick stated in a bit of a surprise since the Republican was using a line made famous by Ted Kennedy.

That moment didn’t last long, however, as the GOP nominee then proceeded to attack the Affordable Care Act.

Santarsiero, on the other hand, advocated for a public option and for Medicare to have the ability to negotiate prescription drug prices.

Fitzpatrick actually supported the concept of the public option when asked by Pezza, a position that would’ve been anathema to conservatives six years ago.

The candidates were asked what steps they would take to fight ISIS and whether their plan would involve putting troops on the ground.

Santarsiero emphasized the importance of working with our allies while Fitzpatrick talked of his experience in Iraq. Neither express an interest in deploying troops.

The Democratic candidate also brought up gun safety and the Republican candidate agreed with the principle of keeping firearms out of the hands of terrorists.

Fitzpatrick emphasized border security as the first imperative when it comes to immigration. He also categorized mass deportation as a “silly idea”.

Santarsiero decried any proposal to deport 12 million people and lamented the failure of reform in 2013.

Pezza then moved on to the disengagement many young people feel with politics.

Steve Santarsiero mentioned his experience as a high school history teacher and Fitzpatrick denounced the gridlock in Congress which he blamed on gerrymandering.

Brian praised his brother Mike for keeping all of Bucks County in the 8th District while Steve noted that Democratic parts of Philadelphia and Montgomery were drawn out of the Eighth while a Republican area of Montco was added.

Pezza praised the candidates for their conduct before the final statements.

During their previous radio debate, the two were practically at each other’s throats so this was an unexpected development. The moderator jinxed it, though, as his statement probably reminded the candidates that they hadn’t gotten in enough of their points during the discussion.

As a result, the closing statements were much more contentious.

Fitzpatrick asserted that only an outsider can change the system. Santarsiero proclaimed that his opponent only got the Republican nomination because he was Mike Fitzpatrick’s brother.

“If his name were not Brian Fitzpatrick, say it was Brian Wilson, he’d still be living in a beach house in California,” Santarsiero stated, using a bad Beach Boys pun that fell flat.

Pezza decided to let the candidates respond to each other’s closings and with that, his hope to avoid acrimony went out the window.

“There’s only candidate on this stage that’s put his life on the line for his country and it’s not you,” Fitzpatrick shot back.

“Make no mistake, I’m not criticizing you for your service,” Santarsiero clarified by stating that his opponent’s assumption of the GOP nomination was an example of the rigged nature of the political system that people resent.

“If you want to know the biggest difference between the two candidates on this stage right now. One is a career politician, and the other spent his career arresting politicians,” Fitzpatrick concluded.

Santarsiero finished by condemning Fitzpatrick for standing by Donald Trump for so long.

Despite the punches at the end, the forum was still rather civil with Santarsiero performing well and his first-time opponent showing marked improvement from his last outing. Each candidate achieved the primary goal of these functions, don’t do or say anything to disqualify yourself.

After the contest, the candidates were given the chance to take questions from the press. Fitzpatrick left, apparently to make his next event, but the State Rep. stayed to take a few queries.

I asked about the recent DCCC ads and whether Santarsiero is worried that he’ll lose low-information voters who don’t know the difference between Mike and Brian.

“It is important for people to know that the person I’m running against is not Mike Fitzpatrick,” he answered before repeating his Brian Fitzpatrick/Brian Wilson joke.

He did concede that his campaign is working on the issue although he also feels voters know the difference and critiqued the switch as “too clever, too slick”.

I finished with another strategy question. Namely, given that PA is one of the few states where you can vote the straight party line, how has the prospect of split-ticket voting impacted Santarsiero’s electoral strategy?

“Listen, as a candidate on the Democratic ballot, I want to get as many Democrats votes as I can. I feel as if we do very well among Democrats we’re gonna win this race,” he stated. “I’ve always had a very good track record of drawing Republican and independent support. I never would’ve gotten elected Township Supervisor or State Representative if I had not gotten cross-aisle support from those folks. So that’s important too and we’re certainly doing very well in attracting Republican and independent voters. But, in the first instance, you have to get your base.”

By the way, I kept a running tally on mentions of the presidential candidates during the debate. Brian Fitzpatrick mentioned neither while Steve Santarsiero brought up Hillary Clinton once and Donald Trump seven times.