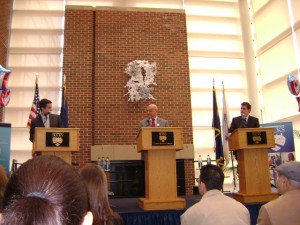 The event was held at the Bristol campus of the Bucks County Community College and was moderated by Professor Bill Pezza.

Both candidates gave brief synopses of their lives and careers in their introductions. Yet they also expanded a bit into their debate strategies.

“I think it’s important that you’re not just against things, you’re for things,” the incumbent GOP congressman said while talking about his jobs plan.

“Congressman Fitzpatrick by his own definition failed to do his job,” by voting to shut down the government, Strouse began.

Pezza began by asking the candidates whether they would support a number of government reforms: 1. Have a nonpartisan body draw congressional districts 2. Allow independents to vote in primaries 3. Allow cross-over voting in primaries.

The Congressman supported the idea of reform to prevent gerrymandering and mentioned his efforts to keep all of Bucks County in one district during the 2010 midterm process.

The topic moved on to income inequality and the participants were asked if this was becoming a permanent reality in America.

Strouse used the issue to counter the perception that the goal of reducing income inequality runs counter to reducing the country’s debt.

“I’m a believer that we can grow our way out of debt,” he said.

He also hit Fitzpatrick for voting to cut Pell Grants which he noted benefits more than 2,700 BCCC students.

The incumbent rejected the charge that he cut Pell Grants and pinned income inequality on the Obama Administration.

He also criticized Strouse’s statement about growing our way out of debt.

Pezza then transitioned to issues that politicians generally delineate to the states: same-sex marriage, marijuana legalization, gun control and abortion.

Rep. Fitzpatrick reiterated that he thinks same-sex marriage is something states should decide while Strouse countered that “we need to move forward in history.”

The Democratic nominee also supported marijuana decriminalization, background checks and the right to an abortion.

The Congressman called marijuana decriminalization “an awful idea” because it is “a gateway drug.”

The moderator noted that given the fact that Social Security, Medicare, Medicaid, and Medicaid Part D were never repealed, it’s likely the Affordable Care Act won’t be either. Therefore, he asked, how should the nation move forward concerning healthcare policy.

Strouse tentatively supported the bill, calling it (as he has throughout the campaign) “a good first step.”

Meanwhile, the Republican nominee said some aspects of the ACA were “beneficial” but still felt we should “repeal and replace” the law.

Rep. Fitzpatrick said he would keep “more than two”, but named coverage for pre-existing conditions and the ability for children to stay on their parents’ plan until the age of 26. He identified the medical device tax and the “conscious” provision as parts he’d get rid of.

Strouse praised the same two items Fitzpatrick mentioned but said that everything should be on the table. He felt that taking individual pieces out of the law could threaten the law’s ability to work as a whole.

The forum then turned to the balance between security and liberty.

Congressman Fitzpatrick pointed out that he voted against a reauthorization of the Patriot Act because “some of those agencies were infringing on the rights of American citizens.”

Strouse noted that he felt Edward Snowden was a “traitor” and admitted the U.S. “went a little too far” after 9/11 when it came to surveillance. He mentioned his work with the CIA and said that those who work there don’t choose to go to the agency to spy on Americans.

The candidates then took on the question of whether the President had assumed too much authority over the nation’s war powers at the expense of Congress.

Rep. Fitzpatrick called on the President to seek another authorization from Congress in December to cover the use of force against ISIS in Iraq and Syria.

Strouse called for a more open debate about the consequences of getting involved in the battle against ISIS and asked what President Obama’s objectives were.

At this point, Pezza asked how to handle Americans’ weariness towards war along with the threats from Russia, Iran, China and North Korea.

“Everyone’s weary, I’m weary,” the Iraq and Afghan war veteran began. “We’re all weary and we should be because we’ve been fighting a war since 2001 and now we’re back at it.”

He did say, though, that the U.S. is good for the world and should lead in the international community.

The Republican Congressman first said that politics ends at the water’s end, then proceed to criticize the President’s foreign policy. He feels the President is not decisive or clear enough.

“What we’ve seen recently from our Commander-in-Chief is that he’s very slow to engage, almost like he doesn’t want to engage,” he asserted.

The conversation then took a turn into a discussion on Ebola. Fitzpatrick supports a travel ban while Strouse points out experts say it’s counter-productive.

The Democratic nominee also called out Congress and the press for scaring the public about Ebola and urged “calm, rational leadership” as the best way to fight the disease.

The three-term incumbent closed by talking about his decades of experience, going back to his years as Bucks County Commissioner.

Strouse, meanwhile sought to explain why he chose to run now, saying “the problems are here now.”

Finally, Pezza asked that if they were to win, would the candidates commit to coming back to BCCC two years from now. Strouse agreed but Fitzpatrick, who has pledged not to serve another term after 2016, said “next election, I’ll be sitting back in the seats.”

Overall, both candidates handled themselves well and performed up to expectations. Fitzpatrick showed his experience by timing his attacks and points perfectly. On the other hand, there were too many opportunities that Strouse passed up but not using the full allotted time. The challenger did well but likely didn’t take the dynamics of the race, which currently favor the incumbent.